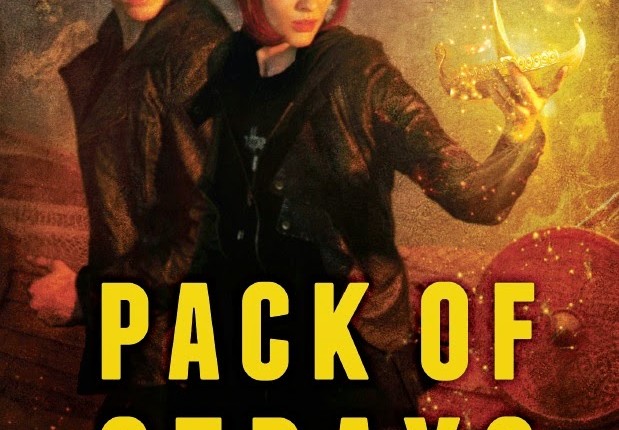 It’s my birthday so I’m taking a day off and handing SHELF LIFE over to my short story nemesis, Dana Cameron.  She’s got a new book out tomorrow so here’s a little bit about it.  Take it away, Dana.
**warning:  Contains spoilers if you haven’t read Seven Kinds of Hell** Pack of Strays is the second book in my Fangborn series of urban fantasy adventures.  A little background:  Seven Kinds of Hell introduces Zoe Miller, a young archaeologist with serious personal problems; one of them is that she fears she’s going crazy when she feels flashes of uncontrollable violence.  She eventually learns that she is not only a werewolf, but Fangborn, one of a family of werewolves, vampires, and oracles devoted secretly to protecting humankind from evil.  Some of the Fangborn want to remain hidden from humanity but a large minority want to Identify themselves as supernatural creatures, possibly to rule humankind.  Zoe ends up on the run with werewolf PI Gerry Steuben and his psychiatrist sister (a vampire), Claudia Steuben (introduced in the short story, “The Night Things Changed”).  While she tries to come to terms with the realization that she is a werewolf—and get a handle on her abilities—she must track down certain mystical artifacts that are the ransom for her kidnapped cousin, Danny.  This leads to a showdown between many powerful factions, including a US senator, a Russian kidnapper, and her Fangborn Cousins.

While Seven Kinds of Hell was about Zoe learning that she is a werewolf, in Pack of Strays, she’s using her archaeological skill to unravel the Fangborn past.  Zoe’s discovering that not being raised within a Fangborn family actually gives her perspective on their most deeply-held beliefs, some of which are disastrously starting to unravel.  She’s also on a mission to learn about her own past and because of the bracelet that Pandora’s box embedded into her wrist, she’s prey to visions that drive her to go after more and more powerful artifacts.  She’s showing abilities no werewolf—no Fangborn—has, and that’s making her the target of the Order of Nicomedia (first introduced in “The Serpent’s Tale”), who are dedicated to eradicating the Fangborn altogether.  She learns that her friends, including her lover Will, believe that she’s abandoned them and is being driven to evil by the bracelet.  Fangborn politics and the Order’s tactics are combining in the worst way, bringing the Fangborn closer and closer to being revealed to humanity.
What I love about writing this series as well as the seven (so far!) short stories set in this ‘verse is that I get to play with different periods of history and how the Fangborn might have behaved throughout time.  Whenever I visit museums and historical sites, I am always on the lookout for images of wolves, snakes (my vampires have a serpentine aspect), or ravens (symbolic of my oracles), playing with how the Fangborn might have fit into a particular culture.  Studying folklore and mythology from all over the world lets me find ways to suggest that the Fangborn attempts to cover their tracks failed, and being observed with their shape-shifting abilities, found themselves incorporated into local cultural traditions.  So far, I’ve tackled Boston during the Second World War, medieval England, and the ancient Olympic games.
The other thing I adore is giving Zoe the chance to show what archaeological reasoning can do.  She may not be a very good archaeologist—in Strays, we see her stealing artifacts, partly to keep them out of the hands of the Order but mostly because the bracelet is driving her to accumulate more of them—but she makes the most of the skills she has.  Actually, Zoe makes the most of everything she has, and that’s one of the reasons I keep challenging her—and she keeps challenging me.
B

io: Dana Cameron can’t help mixing in a little history into her fiction. Drawing from her expertise in archaeology, Dana’s work (including traditional mystery, noir, urban fantasy, thriller, and historical tales) has won multiple Agatha, Anthony, and Macavity Awards and earned an Edgar Award nomination. Her second Fangborn novel, PACK OF STRAYS will be published April 15, 2014 by 47North.  A Fangborn short story, “The God’s Games” appears in Games Creatures Play and Dana’s story, “The Sun, The Moon, and The Stars,” featuring Pam Ravenscroft from Charlaine Harris’s acclaimed Sookie Stackhouse mysteries, will appear in Dead But Not Forgotten: Stories from the World of Sookie Stackhouse in May.