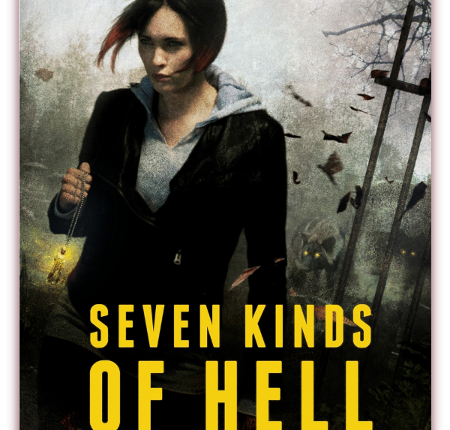 Today’s bit is a guest spot from Dana Cameron. Dana and I have been good chums for years so that’s why I’m entrusting Simon Sez over to her. She’s also the proud mother of a brand new book, Seven Kinds of Hell. 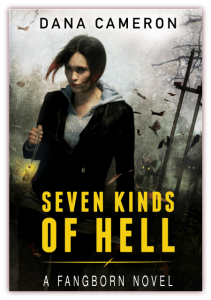 When I was growing up, I thought briefly about becoming a writer, but ultimately decided against it.  Because I wasn’t interested in getting into bar fights or running with the bulls, I figured I would never make it.  So, at the tender age of six or seven or eight, I put that dream aside and shortly thereafter was bitten by the archaeology bug.  I think about that now, and I’m struck by two things.  One is how pervasive the idea of the Hemingway-esque writer must be in American culture for a young kid to imagine that’s how writers write.  It would be years until I got another glimpse of the writing life, courtesy of Louisa May Alcott and Jo March.  The other thing I realized is that I put the idea of writing aside because I was pretty sure I had no imagination.
Archaeologists make a habit of reconstructing lives from trash, walking around in the shoes of people who’ve been dead for hundreds or thousands or tens of thousands of years.  But that’s just scientifically-informed speculation, based on hard data—right?
I still get uncomfortable considering the notion of imagination.  But after having written six mystery novels, it became quite clear that I wasn’t writing biography or field reports, so something else had to be going on.  And when I started writing about werewolves and vampires and oracles (albeit with some archaeology and history thrown in), it became even more apparent I wasn’t writing non-fiction.  These creatures weren’t in my reference books or and didn’t appear in my data collections.  They had to come from somewhere else.  And the books and stories had my name on them, so…
Imagination was still a mystery.
Walking down my street a couple of years back, I happened to notice what looked like a chunk of human skull perched on a rock outcrop.  My first thought was, jeez, whoever that belonged to had a head the size of a watermelon!  Then my second thought was, okay, how did that chunk of skull get there?  And it’s kinda flat to be a cranium.  Then, oh, it’s a dried out piece of pumpkin, left here from the autumnal pumpkin-smashing rites.  Then I felt very stupid.  Of course it was more likely a piece of bark or pumpkin and not a human skull.
Well, yeah, more likely.  Occam’s razor and all that.  And that’s when it struck me.  It would have been far more interesting if it had been a human skull, far more interesting to ask how the skull might have arrived there, why no one had noticed it, etc.
That was my first insight into what imagination might be.  Not grand inspirations from on high, not a divine gift, not the touch of the Muse (pick a Muse, any muse).  I think the key to imagination might be not immediately squelching the first notion that pops into your head.
It’s going with that first weird thought and not censoring your questions about it, or your responses to it, at least not until you’re at the editing stage.  Just don’t trample the odd way you happen to see things at first, don’t squelch that inspiration.  There’s plenty of time for logic later.

Whether writing noir, historical fiction, urban fantasy, thriller, or traditional mystery, Dana Cameron draws from her expertise in archaeology. Her fiction (including several Fangborn stories) has won multiple Agatha, Anthony, and Macavity Awards and earned an Edgar Award nomination. The first of three novels set in the Fangborn ‘verse, Seven Kinds of Hell, will be released March 12 by 47North. Dana lives in Massachusetts with her husband and benevolent feline overlords.