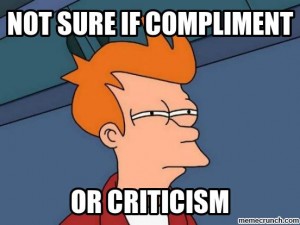 I’ve cribbed this quote from Luke to talk about the backhanded compliments that I’ve encountered.

As a professional scribbler, you have to be able to take things on the chin.  It’s not that a writer has to develop a thick skin but just remind themselves that stories are subjective in nature—what one person lionizes and another will despise.   There’s no right or wrong—just opinion.  It’s the nature of the sport.

When it comes to harsh criticism (and I mean harsh) and incorrect assessments of my books, it’s easy to deal with the issue.  I simply I resist the urge to argue back and thank them and lament that they didn’t like the book.  It’s the professional and smart thing to do.  Getting into a war of words isn’t going to solve anything or change minds.

“Mystery is such a shallow and superficial genre, don’t you think?”

This was said to me during a book signing Q&A.  Actually, this was an interesting question but I wasn’t sure what the questioner was expecting me to answer.  I wasn’t about to diss my own genre.  Now, this may have been a derogatory remark but you know what I ended up taking this comment and turning it into a panel discussion for a convention.

“Just sign it because I’m going to return it after I’m finished reading it.  I haven’t paid for a book in years.”

This was another bookstore signing remark.  I’m always stunned when people share insider information about how they bilk the bookstore either by returning books.  Don’t people realize how I make a living?  I don’t get paid if books get returned.

“I should be able to get this cheap from eBay, right?”

I don’t mind the bargain hunter reader, but please remember who you’re talking to.  I think people forget I’m the struggling writer and not a sales rep for the publisher.

“My son wrote very well in high school and he would have been on the New York Times bestsellers list if he pursued it so I just want to let you know you’re nothing special.”

This is my favorite backhanded compliment.  It was said to me at a library by a lady just moments before I kicked off an author panel.  I think I would have laughed if I wasn’t so stunned by the remark.  To this day, I don’t know if it was mean spirited or just thoughtless but either way I told her thanks.

“Why can’t you write a book like that nice Michael Connelly?”

My mum said this.  Yes, my mum.  She said this after reading my first book.  I suppose this is what they mean by unconditional love…

I don’t usually tell tales but I thought you might enjoy insight into the life and times of the average writer.  So if you do bump into a writer, just give them a hug.  They probably have endured a few backhanded compliments.