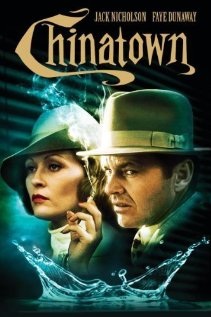 I love a good movie, but the problem with movies is what makes a good movie good is subjective. What I think is a good movie may not be your cup of tea. I accept that and you do too. However there are movies which take on iconic status because they’re universally loved. Well, not quite. More often than not, I tend to be one person who doesn’t like certain iconic movies. Now this could because I’ve had a lot of head injuries, but I don’t think so. So, I feel I have to play the role of the little boy in the Emperor’s New Clothes and I have to tell you that the King is naked.

Here are four movies that I think are mediocre at best that most of the world thinks are masterpieces. Chinatown:
This is my number one pet peeve movie. Most people agree that this movie is a masterpiece. I’ve watched documentaries about the symbolism in this film, but I’m sorry I don’t get it. I find Chinatown a dull and confusing movie. I did as a kid and I do as an adult—and I shouldn’t. I love 40’s noir, especially noir set in LA, but it’s as if Robert Towne took that’s confusing about The Big Sleep and used it for the inspiration for Chinatown. Take the classic line, “Forget it, Jake. It’s Chinatown.” What’s Chinatown!?! Corruption, incest and murder?? That’s Chinatown. How is that Chinatown? That’s not Chinatown. That’s gibberish. So much so, I’m going to write a book about fatigue levels in commercial airline manufacture and the subsequent cover-up and I’m going to call it, Paper Cup, just so that the last line can be “Forget it, Jake. It’s Paper Cup.” Yes, I am a little hot under the collar, thank you, but this movie does that to me. Maybe that’s Chinatown. Who the hell knows? Let’s move on.

Scarface:
Now, I’m talking about the Al Pacino remake done in ’82. Quite simply, this is one of the most God awful films ever made. Everybody’s acting is terrible and over the top, not mention poorly cast. The music makes me ashamed to have ears. The story is bad Shakespeare. The set design is hideous to the extent to give the movie the impression that it had no budget. But for some reason, guys love this film and I don’t know why. I’m a guy. I like sports. I believe in turning my underwear inside out to make it last an extra week between washings. So I should like Scarface, but I don’t. It’s just bad. When I like to say hello to my little friends, this isn’t one.

Full Metal Jacket:
Stanley Kubrick’s Vietnam masterpiece. Well, not for me. Again, this is another guy movie must have. Like Scarface, most of my men buddies have this movie in their DVD collections. While they’ll rave about the male camaraderie of it and violence, the movie falls flat for me and for one very big reason—the lopsided storytelling. I don’t know what the movie is about. Is it about the horrors of basic training or is it about being a greenhorn in battle? I don’t know, but it should be one and not both. And to be honest, the basic training section dominates the film that the Nam portion feels tacked and really doesn’t have a purpose or a sense of meaning. The only thing to marvel at is that they did a really good job at making London’s east end look like Vietnam.

The Empire Strike Back:
I’ll be upfront. I could have taken a poop over episodes I-III, but I think most people agree that they’re terrible movies, but Empire is different. Star Wars fans float this one in rarified air where a sequel is better than the original, but I disagree. The problem with it is that the movie doesn’t have a beginning, middle and end. Star Wars: A New Hope does. Empire doesn’t. Two hours in, someone blows a whistle and says, “We’ve got enough in the can. Let’s go.”I remember sitting in the movie theatre, just twelve years old, and thinking—this is just an intermission, right? Wrong! George Lucas duped me because he knew he had Jedi to come and he could leave it there. I also take issue with what is considered one of the greatest story twists in movie history—“Luke, I am your father.” While this is a great twist, it’s also the kind of twist that happens most weeks in daytime soap operas. Also, once we possess this knowledge, story integrity develops a little wood rot. Why didn’t Obi-Wan Kenobi drop this piece of knowledge to Luke earlier? Also when Vader and the Emperor are batting on about Anakin, you’d have thought Vader would have said, “You know Anakin was me before I went all dark side up in this bitch?” Empire is a good movie, but let’s face it, it ain’t a masterpiece.

So there you have it. Now feel free to convince me otherwise and I invite you to do it, but don’t expect me to change and with Christmas around the corner, don’t think about sending them as stocking stuffers. Alternatively, lob out a few of your problematical classic movie suggestions. I know we all have at least one in us.

5 Responses to “Hump Day: Are We Watching The Same Movies”