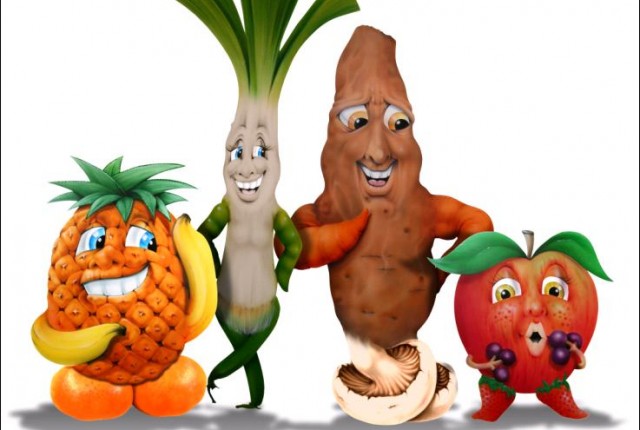 I drive Julie to distraction with this one. She’ll hold up a radish or something and say, “Will you eat this and if so, how will you eat it?”

I have issues with fruit and vegetables. I don’t know where it stems from, but I’m picky. Let me throw out a few of examples.

I hate oranges, but love orange juice.
I love bananas, as long as they aren’t cooked.
Carrots are great cooked, but raw, blah!
Strawberries are great, but only cold.

I think it’s a texture thing. You know some vegetables taste like wood unless they’re cooked, while others are nothing better than sludge when cooked.

So poor, little Julie stresses in the produce section over whether I’ll eat this or that. Sometimes, I’ll surprise her with “oh, I love those.” She’ll get excited but I’ll follow up with, “But only if they’re cut up real small.”

Cleanliness is an issue too. If I think the lettuce is too old, or if it has a blemish on it, I’ll chuck it.

Julie wants me to mention mushrooms, because I peel off the skins off mushrooms and I won’t eat the stalks. She says, “What’s your problem? It’s only a bit of dirt.” Yeah, but that’s like saying, “Oh, that’s just little bit of rabies.” I’m sorry; I’m not eating dirt. If I wanted to eat dirt, I would have been born with a snout. So there. Anyway, mushrooms aren’t vegetables. They’re fungi. It doesn’t count.

I think it has a lot to do with not liking vegetables as a kid. For me, fruit and vegetables need to be disguised. Fruit is best presented in pie form. I wouldn’t recognize a vegetable if it was wearing a beef overcoat.

Of course, there are exceptions and for me, its apples. Apples are great as they are, as long as I don’t have to eat the skin, and they’re great cooked, as long as they’re mushed.