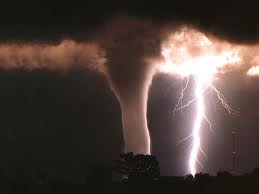 It’s December and the weather is really on the change, so it got me thinking about the weather. Okay, England gets a hard rap about its weather, but overall, it rains a bit, it’s a little bit sunny, it gets windy sometimes and it’ll snow occasionally. Nothing to get worried about.

It’s not like that in the US. The rain can wash you away. The snow can bury a town. The wind can relocate your home to a different state. The ground can shake and make everything fall down. And I’m not really used to that. It’s just so aggressive. American weather seems to have no manners.

Weather-wise, it’s been a crappy couple of months in the Bay Area. It’s rained a lot. It might not seem serious, but it sorta is. If my sump pump fails (which it did), I will end up with a few inches of standing water under the house in an hour. The hillside I live on is prone to slides. Waterlogged land means additional weight that it can’t support. But this is pretty minor compared to some of my experiences.

My first visit to the US was to Oklahoma seventeen years ago. Now, I know the Midwest has its reputation so I was expecting some quirkiness, just not some quirks. I noticed most people drove cars with lots of little dents in them. This wasn’t as a result of bad driving, but the golf ball-sized hailstones that had smashed the crap out of their cars. I bought a hardhat after that tidbit.

I also noticed that most bars, homes, and restaurants flicked between sports channels and the weather channel. Okay, maybe to these people the weather channel is riveting entertainment. They probably watch C-SPAN for a little spice.

But, being the naïve pup that I am (forever underestimating the world and all its dangers) I missed something fundamental to the Midwest—tornadoes. And wouldn’t you know, I’d come to Okalahoma in the middle of tornado season. Well done, Simon. You found trouble once again.

People told me that it was unlikely that I would see a tornado, but they didn’t know me about my luck. About a week into my trip, the news hit that a tornado was heading our way. Phone trees informed family and friends that people may be getting a one-way ticket to Oz if they didn’t batten down the hatches and switch over to the Weather Channel.

So there it was, I was facing a head on with a tornado and what was I supposed to do? The official advice: Get in the bathtub. No one had to tell me twice. I had everything I needed–bubble bath and a rubber ducky. Just before the twister reached the outskirts of town, it remembered a prior engagement in Missouri and took a right turn. We were safe!

I expected group hugs and counseling for the emotional rollercoaster, but there was nothing. As soon as the all-clear was announced, everyone came out of hiding and went back to their lives. It was surreal. I’d dodged a wind-driven bullet, but this was commonplace to everyone else. I wanted to celebrate life. Everyone else wanted to get some barbecue. What can I say? It’s a different world.

But here I am in California. We might not have tornadoes but we have earthquakes. I live two miles from an active fault line. A year ago, we were having an earthquake every few days for about a month. Some were mild, but some weren’t so mild with the epicenters less than less than five miles from my home. One earthquake threw me off the couch. During another, a wall slapped me in the back of the head. A couple I’ve slept through.