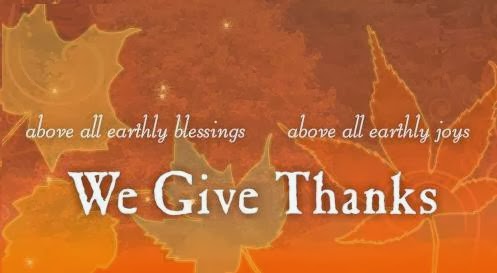 As I’ve mentioned before, I’m not really into Thanksgiving.  As an outsider to the US, it’s an alien holiday that I’ve failed to warm to.  It always feels like Christmas-lite with Chrimbo just a month behind.  However, not to be the Grouch Who Maligned Thanksgiving, I do have a lot to be thankful for—if I squint a bit.
On the surface, it’s been a year that came with four flat tires.  It’s been nothing but problems and frustrations that have tested my faith in life and the world to the breaking point and a little bit beyond.  This came in the guise of moving house.   Julie’s firm was on shaky financial ground and she needed to jump ship and we needed to move house because it was time and our neighborhood had gone down after all the foreclosures in the last few years.  On the surface it looked like no big thing but it turned into eight months of hell.  First we went through the frustrating saga of being outbid time and time again by investors and all the wasted effort of writing offer after offer that went with it.  When we finally got an offer accepted, our mortgage lender pulled out at the eleventh hour, then proceeded to jerk us around for six weeks.  Every day came with ludicrous demands that left us on the verge of financial ruin with no recourse if the worst case scenario played out.  I remember being in a permanent state of rage to the point of threatening to burn down the house I’d just bought and the house I currently owned and telling whoever what the ashes could have them.  My mortgage broker, someone I’ve known for 14years, is scared of me.  So let’s say I wasn’t in a good place.  When it came to selling our old house, I was in no mood to take any crap.  I think our battle hardened state kept that house sale on track when that threatened to go sideways.  Naturally, this drawn out train wreck tainted my whole view of life, the year and most things.
That changed when Julie and I were reexamining events over dinner.  Actually, under all the wreckage, 2013 has been a good year.
·         Julie got a new job a few months before her old firm went bust.
·         We found a really nice house and we sold old one for a profit (something that didn’t look likely a couple of years earlier).
·         I had a new book out, sold the foreign rights to a couple of others and had the second best year for book sales.  And I got the rights back to the Aidy Westlake books.
·         Julie’s throat surgery and slow recovery was disappointing but she seems to be moving in the right direction.
So all in all, it’s been a pretty good year.  It’s just that we went to war for every little success and didn’t have any fun doing it.  I’m trying to let go of all the anger and frustration and accept the end result.  Let’s just say that’s still a work in progress.  There are a few people who might end up at Miller’s Crossing should they cross my path.  But I am looking forward.  I’m hoping 2014 is a good year with plenty of plain sailing.  You never know, it could be the year that I’ll embrace Thanksgiving.
Thanks to all my friends that helped out this year and all my readers.
Happy Turkey Day, my fellow Americans.