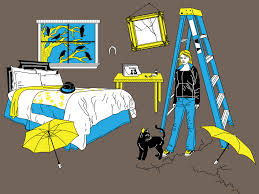 I’m very superstitious about loads of stuff. Placing new shoes on tables. Owning anything green. I can’t think about my soccer team the day before the game because if I do, they lose. I guarantee that every time I think about them, they concede a goal. These may be examples of totally irrational behavior, but I have been struck down everything time I don’t pay respect to my superstitions.
One such superstition that has come into play recently on a regular basis is changing flights. I don’t like to change flights. If I’m booked on the 2pm out of Oakland on a Thursday, that’s the flight I’m taking. I don’t care if there’s one an hour earlier or another where the flight attendants hand out complimentary puppies. I want to stick with my original plans. Fate put me on the 2pm out of Oakland and I shouldn’t screw with fate. Fate doesn’t like it. If I change flights, fate might unleash Richie Valance syndrome upon me.
For those that don’t know who Richie Valance is, he sung La Bamba, but he’s more famous for flipping a coin to win a seat on a plane with Buddy Holly–that ended up crashing and killing everyone on board. See, I told you that fate doesn’t like have her plans interfered with.
In honor of Richie, I’ve always been pretty touchy about switching flights, because fate and luck have a habit of conspiring against me.
I got to put this fear to test a couple of years ago when I was on a book tour. My travel schedule was a fine and delicate construction. If I was late for one leg then the whole thing would come crashing down. On the whole, the travels gods were on my side and everything went smoothly, but I did have to change my return flight from Seattle. I would be leaving a whole day earlier. Talk about rubbing fate’s face it! I was at the stage of my traveling where I just wanted to be home so I changed my flight.
So let the panic begin!
All I could think about was what could go wrong. Why was there space on my new flight? If it was such a good flight, why wasn’t it full? Did someone know something I didn’t? I sat in the departure lounge checking out my fellow passengers to see whether any of them were the kind who think opening the door at 35,000 feet would be a good idea. I made a point of giving the pilot the once over to see if he looked competent. I inspected the aircraft for cracks and other irregularities. These things and about four hundred others went through my head.
Obviously, nothing went wrong because I’m here and the flight was perfectly lovely. But that’s the problem with fate. I don’t really know what she has in store for me. Switching flights might have been fate’s original plan, in which case, sticking with my original flight was the wrong to do. At the beginning of the year, I got bumped from my flight and put another only to have to change that flight an hour later. So there, I should have been on one of three flights. Fate must have been apoplexy. I was the queen in a three-card Monte game of fatalistic proportions.
Fate’s backlash might not be as catastrophic as what she did to Richie Valance, but it could be one of those catastrophes that will have me kicking myself for ages, especially in the passenger department. I don’t want to find out the flight I just switched from happened to be entirely populated with Playboy bunnies on their way home from their annual vacation, or that I’ve just swapped to a flight filled with halitosis sufferers. You may think this is crazy, but I have sat next to some odd people on airplanes, such as a guy who insisted sitting bolt upright with a blanket over his head for six hours, an immigration investigator when my visa status was in flux, and a man with one arm who insisted on getting into a tug-o-war. Yes, this happens to me and it has a lot to do with pissing off fate.
This is the problem with fate. It’s so damn confusing. I just don’t know what she wants. It’s enough to make a person neurotic.