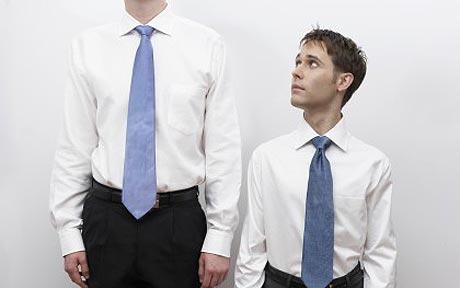 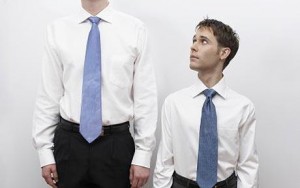 I’m a little over average height–for a teenage girl. So I’ve spent most of my life being smaller than everybody else. By the time my little sister was seven, she was a good couple of inches taller than me, even though I was ten.

I don’t know why I get like this and I feel bad about it, because I worry that that’s how people feel when they see me. Don’t hate me because I’m small. So why do smaller people spook me?

Don’t get me wrong, I’m not one of those self loathing short people who wears thick socks and platform heels. I like being short. I think it makes me distinctive, like having a beard, sort of.

I think it may have a lot to do with status. I’m the short guy and I like being the short guy and everyone knows me as the short guy, so I get jealous when a shorter guy steals my thunder. Sounds silly, but it’s true. Think about it, when this short guy upstart (or should that be downstart?) shows up, where does that leave me? I’ll tell you. In short guy limbo. No one wants to be referred to as the tall-short guy. That’s a half-breed race that no one wants to hang out with.

If I had the choice, I’d like to be shorter. I don’t want to be so small that I can’t get a ride on a rollercoaster, just a tad shorter, somewhere in the 5’2″ region. This would cut out a lot of those short guy usurpers I have to put up with.

I can’t say this makes a lot of sense, but there it is. Anyway, I’ve got to go, breakfast is ready and Julie has to lift me into my high chair.