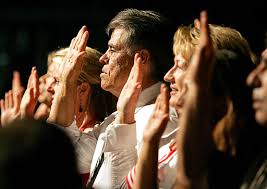 I became a citizen a few years ago and I was reminded of the final hurdle I had to jump through to get there–the civics test. Like all trips to Immigration, it was an adventure.

Since the ICE (formerly the INS) is a government department, they make everything tough. You get prescreened before entering. The sign, amongst other things, said I couldn’t bring explosives or firearms into the building. Bloody hell. San Francisco has virtually no armored personnel vehicle parking and bazooka daycare fees are off the scale. Where’s the second amendment when you need it?

Actually, this was a pretty painless trip to the San Francisco branch of the ICE. One big change since Homeland Security took over the INS in SF is that the place got an extreme makeover. Can you say, “Move that bus”? The place is very snazzy in an airport lounge sort of way, having dropped its Department of Motor Vehicles look.

But one thing that hasn’t changed is the staff. They’re just as brusque and borderline rude as usual. Part of the immigration process is a form of hazing. When I was last fingerprinted, the technician insisted speaking only in Spanish. I knew enough to understand her. When she finished she told me to have a nice day in English. So a trip to Immigration means someone is going to get angry with you for something you’ve yet to do. This time, I got barked at when I walked up to the counter. The lady asked if I was in the right line. I told her I was. That foxed her, but she got back at me. She told me my ticket number was C-12 and wrote it down for me so I wouldn’t forget it, then kept the paper. When I asked for it, she told me to sit down and wait. Touché, my wily ice-maiden…

While I waited, some poor sap wandered around trying to find someone to talk to him. He got the runaround. Finally he tagged an immigration officer. He looked at the guy’s paperwork and shook his head. “I’m sorry, but it’s over for you today. You’re late. We’ve moved on. Check in at the counter and tell them you can’t be seen. You’ll get a recall.” I just hoped this guy’s bad karma wasn’t catching.

My name got called and I stood by the appropriate door waiting for my interviewer to arrive. A very affable elderly man welcomed me inside. I have to say that every one of the Immigration officers who have interviewed me have been the nicest people. It’s the reception, counter and security staff that have been total gits. Well, me and Mr. Nice walked to his office.

“You’re getting seen early,” he told me. “The previous guy turned up late, so you got his spot.”

Yeah, I thought, we just met.

We got to his office and he made me raise my right hand and swear to tell the whole truth. We went through the red tape of showing him my green card, passport and driver’s license. We agreed that I take a bloody bad picture. He checked on all my information. Am I still married? Do I still have a job? Am I communist? Am I a member of a terrorist organization? Am I up to date with my taxes? Would I die fighting for the US of A? That’s a bit extreme, I thought, but okay, in the case of alien invasion I would.

Without preamble, Mr. Nice launched into the civics questions. He blitzed through all ten in about sixty seconds (including my answers). I didn’t have time to think, just answer. It was instinct. I felt like I was on a game show. At the end, I expected him to say, “You’ve done it. You won the car and the boat.” Instead, he said, “You scored ten out of ten.”

To get the big prize, the chance never to return to the ICE, I had to write a sentence in English. Nailed it! And I was in. U-S-A., U-S-A and so forth.

Obviously, the big question came up as part of the ten questions–who was George Washington? “The first American president–or an enemy of the British Crown. Depends on your point of view,” I answered. Actually, I kept my second answer to myself until he approved my paperwork. Mr. Nice laughed. See, I told you he was nice.

We finished up and he approved my paperwork, welcomed me to America and walked me out. He sat me down in a different part of the lounge and told me to wait for someone who would be through shortly with my swearing in ceremony paperwork.

I waited for a few minutes and Ms. Snarky from earlier walked past me, over to the opposite side of the lounge and started barking names. I knew where this was going. I heard my name being called with several others. I got up and went over to
her.

I wasn’t taking this anymore. I had a piece of paper in my hand saying I was approved and a new American. I’d made it through nine years of Immigration carping. I’d been accused of lying, blamed for their errors (including them losing my file) and watched one immigration guy make Julie cry. I wouldn’t be visiting this department anymore. I didn’t have to be subservient to them. I was street legal.

“Hey,” I said loud enough for others to hear. Very un-British of me. “The officer told us to sit over there and wait. Okay?”

Oh, is right, lady, I thought. I don’t have to take that. I’m an American and I have the paperwork to prove it. 🙂

So I’m English-American—so what does that mean? Am I going to shed my English identity? Like Thomas will I deny my nationality three times before the cock crows? Will I be loud in public? Will I buy a larger car–even a pickup? Will I put cheese on all my meals? Will I start liking Country music? Probably not. I’ll always be English first. There’s some wiring that can’t be reconfigured. I’ll continue being me. Consider me an English person the Americans can’t get rid of now no matter how hard they try. I’m unflushable…