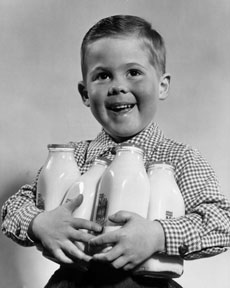 I have issues with milk. The smell of it makes me heave, regardless of how fresh it is. It’s totally psychosomatic with heavy tendencies on the psycho. Like most irrational symptoms, I can squarely place the blame for this one at the door of childhood. I started school in the 70’s and in those days, every child between 5-8 years old got half a pint of milk in the morning.

The milk was delivered in the mornings and two milk monitors from the top year wheeled in the milk then went from class to class handing out delicious cow lactations. Sadly, on one such warm spring day, the monitors forgot to bring in the milk first thing in the morning and didn’t get to it until the sun had a couple hours to work on it. When it got my bottle, it was warm to the touch and the foil cap was heaving at its seal.

“Drink it, Simon. You don’t want to grow up being short, do you?”

“You’ll taste funny if you don’t drink your milk.”

So I drank, along with all my class chums and let nature take its course. Thirty minutes later, I made all my growth enabling milk reappear.

Since then milk, fresh, bad or whatever ignites a synapse in my brain that says, “Miss, my milk tastes funny”

I went a long time after that not drinking milk, but after too many years in the wilderness eating cereal dry, I returned to it. But I have set rules.

1. The milk has to be ice-cold
2. It must be deadly fresh. If it’s more than a day old, then it’s out the door (which annoys Julie to no end).
3. I can’t inhale while I’m consuming it. Sounds tricky but it can be done.

Julie is a lifesaver, although she doesn’t like her role. She’s the person I can go to and say, “Does that smell off to you?”

At that point, she usually disposes of it. I think it’s easiest for everyone concerned.

I always wondered what a kafuffle I would cause if I won the Indy 500. They’d hand me the victory milk and I’d have to say, “no.”

But just as irrationally, I have a milk exception. I can drink chocolate milk. I can chug a pint of it with no
problems. I don’t know why. I certainly don’t smell that milk smell when it’s chocolate flavored. What can I say? I’m an enigma.