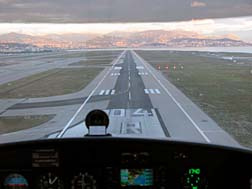 I have a small talent for disaster. If I can be in the wrong place at the wrong time, I can do it. This is an incident happened while I was a student pilot. I hadn’t always been afraid of heights as a kid. In fact, I was a bit of a suburban monkey, forever climbing trees and running along rooftops. My fear struck during a business flight to Paris where I realized I was mortal and I stood no chance of survival if gravity got the better of aerodynamics. So I decided to learn to fly to combat my irrational fear.

I took to flying pretty well. Being a competitive person, especially with myself, I wanted to do well. I had to ace the milestones laid down in the course, one of which was the first solo flight. The target time to go solo is ten hours. I went solo after nine. Once I had that under my belt, I was mandated to accumulate a number of solo hours. I did so after a scheduled training class with my instructor. At the end of our exercises, he’d hop out and I’d fly off again.

Usually things went well, but on one particular day things didn’t go to plan. I was returning to the landing strip after practicing some slow flight exercises in the local area. I contacted air traffic to tell them I was coming back to land and they gave me clearance to rejoin the circuit. The circuit is essentially a traffic circle in the sky the planes join to take their turn to take off and land. I was halfway around the circuit and preparing for my descent when another plane (a twin-engined Piper) radioed in for a landing. Since the aircraft was the bigger and faster plane, air traffic wanted to get him down before me. He said he was five miles out and asked for a straight in approach, essentially allowing the pilot to circumvent the circuit.

I told air traffic that I was on “Base” which is the last leg before final approach. The other pilot quickly corrected himself saying he was only two miles out. Air traffic got a little nervous and asked if we could see each other. We both responded that we couldn’t. The pilot radioed in to correct his position again. He said he was right on top of the airport. Air traffic nervously asked where I was. Equally as nervous, I told them that I was about to turn onto final. There was a moment of hesitation from air traffic and I could understand it. They had a tough decision to make. Was it better to have someone competent get the plane down on the ground quick or keep the experienced pilot up in the air to prevent spooking the student pilot? They decided to give the twin engine priority over me, but asked again if we could see each other. We both said no again and given no other instruction, I reluctantly turned on to final. As I turned left, my wing lifted and there, about a hundred feet above me, was the twin-engine Piper and its pilot had no idea he was descending on top of me. Because of the positioning of our wings, we’d both been in each other blind spots.

We were seconds from a collision. With no time to explain the situation, I slammed the plane into a dive to avert the crash and radioed into air traffic to tell them what had happened. A shocked voice told me to get into the circuit again and come home. With a racing pulse, I said that I would.

It was then I realized I’d lost my visual bearings and I didn’t know where I was.

A beginning pilot relies entirely on visual cues, but after my avoidance maneuver, I didn’t recognize a damn thing. Although I’d flown over the same places a thousand times, not one seemed familiar. I found it impossible to reorient myself. My rampant adrenaline clouded my decision-making.

I radioed in to admit I was lost and if I didn’t get a handle on it soon I’d be lost in a big way. As if on cue, the late afternoon light failed when low cloud descended and a mist rolled in. Just to complicate matters, the airstrip couldn’t switch on its runway lights to help aid my return because they had been affecting repairs all day.

Panic gripped me. My mouth was dry and I was sweating like a pig. My fear level strangled my good judgment. I still had the plane in a slow descent. The plane’s altitude was 300 feet and I was heading for a crash landing in a field strewn with power lines. But that was cool. To get myself out of the hole I was in was going to take a lot of courage and at that moment, I didn’t have it. I considered how easy it would be to take a chance on crash landing the Cessna in the field. I understood that by doing this, there was a good chance I’d be killed, but at least I wouldn’t have to deal with the pressure of the situation. Simply crash and my anguish would be gone. It sounded like a plan and I let the plane drift downward. I was down to less than 150 feet when I accepted that a possible fatal crash wasn’t a viable plan, so I took the plane out of a descent and put it into a climb. Taking this action gave me no pleasure either. With the mist closing in, I didn’t know if my ascent would fly me directly into someone. That very much in mind, I leveled off at 400 feet safe in the knowledge that it was unlikely that anyone would be that low.

I told air traffic that I was totally lost. They admitted they didn’t have visual contact and told me to work at it. That instruction felt like a kick in the guts and as much use as a chocolate teapot, but I did my best.

Still nothing looked familiar. Twice I blew over the runway from the wrong direction. Both times my sudden discovery of the airport came as a surprise. I tried to maintain a visual lock on the runway, but panic running riot through my brain meant I lost visual contact with safety within seconds. It was a miracle that I didn’t crash into someone flying like that. Air traffic admitted they were struggling to see me because of the mist and that they were clearing the runway and other aircraft until I was down.

I checked my gas gauge. I still had half tanks, which was good enough for another couple of hours of flying time. A couple of hours? The plane might be able to stay aloft for that long, but I knew my nerves wouldn’t. Stress would kill me long before then. I really had to get a grip and get the plane down.

I knew why I was so panicked. For the first time in my short flying career, I’d lost my safety tether. As a student pilot, I wasn’t much different than a baby bird that doesn’t venture far from its nest. I’d spent so much time in the circuit that it had become my beacon, my safety blanket. If I ever needed to feel safe, I knew where to go, but not anymore. Getting lost, I’d broken that link with safety. I was flapping around in the breeze with no hope of ever getting home safe. I flew aimlessly in circles draining away my fuel and hope reserves.

Just as I was at the point where I didn’t know what I was going to do, a helicopter announced he’d spotted me and had a view of the runway through a pocket in the clouds. Air traffic handed control to him without a moment’s hesitation. He told me to do exactly what he said and when he said it. I told this sky angel I was his to do with what he would.

As I crested a tree line over a hill, the runway in all its blazing glory came into view. I was coming in at an angle to the runway, but I didn’t care. I could wing a landing, even if I trashed the plane doing it.

Although it should have been easy to make a landing, it wasn’t. Because of the shallow angle I was approaching from, the runway’s perspective from the air was unusual, making it hard to estimate a descent rate to land. But I wasn’t about to screw this up now, not with the chance to walk away from this in one piece now within my grasp.

I homed in on the lights twinkling in the distance and brought the plane down, making one of the best landings of my flying career. The moment the undercarriage kissed the tarmac my jelly legs and rubber hands regained their strength. The relief I felt was so overwhelming that I wanted to cry. I radioed in that I was down safe and sound. I continued to give an Oscar speech thanking everyone and apologizing to the airport, air traffic, the helicopter and everybody tuned in to the radio frequency.

I parked up and tottered into the flying club’s main office where a number of instructors congratulated me and the chief flying instructor told me, “You just learned the most valuable flying lesson you’ll ever learn.”

And I knew what he meant. It had nothing to do with not losing my bearings but with dealing with stress and putting all the safety training they’d taught me into action and coming out the other side. On the way home a wave of euphoria swept me away and I couldn’t stop laughing and crying. This passed, but the exhilaration didn’t. My adrenalin levels turned me into a rubber ball bouncing off all the walls the next several hours.

Up until that day, I’d been pretty cocky about my flying. I was accurate and adept, but that meant I’d never had to deal with fixing a problem. But the near miss taught me a lot of things, not the least of which was how to be humble. Unfortunately, it never did cure my fears of heights.