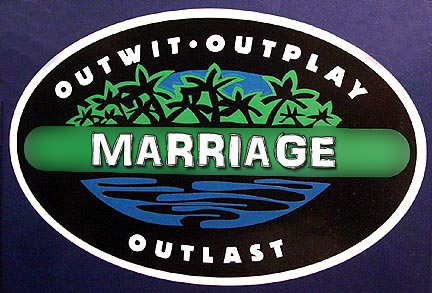 Over Thanksgiving, I was thinking about Julie and me and our time together. We celebrated our fourteen wedding anniversary the other week and it only seems like twenty. I don’t mean that in a mean way. Actually, it does seem longer. The early years (which we have come to think of as our immigration period) meant a lot of moving around and changes. Life was never the same two months in a row. It’s not that much different now. We still seem to be in constant motion. One day we’ll slow down.

So as I reflect upon our fourteen years of marriage together—which I believe is ivory but it feels like lead, judging by the weight hanging around my neck these days—I thought I would drop some marriage wisdom on you that I’ve learned from Julie along the way:

1. Going to the bathroom with the door open is wrong and it doesn’t matter if the cat and dog like it.

2. Underwear is not to be worn for several weeks at a time, even if it is turned inside out.

3. Animals have a great sixth sense of danger, so when your spouse walks in and the animals leave, don’t ask questions, just follow the animals out of the cat flap.

4. Buy a shed to put at the end of the garden. My dad has had a shed since before I was born, now I know why he saw it fit to have a sanctuary.

5. Licking plates and utensils is not a legitimate cleaning method.

6. Socks should match each other when worn (I’ve not adjusted to this one too well–it does tend to be the luck of the draw–or drawer).

7. Damp is not a fabric softener fragrance.

10. No, Sofía Vergara wouldn’t “fall for me” if we were to meet in real life. This same rule applies to Salma Hayek, Lucy Liu, Gillian Anderson, Eva Mendes, Anna Torv or any other woman else I care to name.

Well, after fourteen years, I would have thought I would be used to the idea of marriage, but I still consider myself single, but married. And Julie just thinks of herself as unlucky this time around.