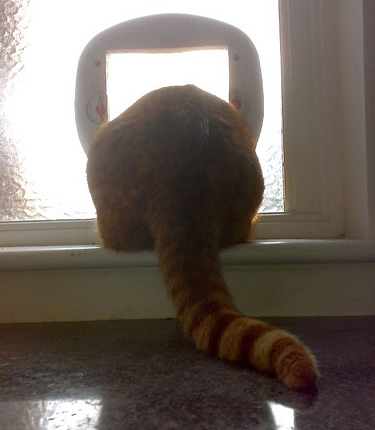 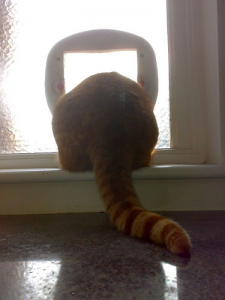 With apologies to Mr. Poe:

This is a semi-regular event for me, especially at this time of year. Somebody who isn’t Royston or Streetcar squeezes through the cat flap. As soon as I hear that click-click, I’m awake. And I know when it isn’t Royston or Streetcar. They have distinctive approaches to entering the cat flap. Royston has a Hollywood approach and barrels through it at full speed whereas Streetcar slides through trying to make as little contact with the flap as possible. That’s a cat for you. But midnight callers have thief written all over them. They tip the cat flap with cautious trepidation.

Not that I’m first to recognize the trespass. Royston is a furry rapier when someone enters his territory. He’s off and barking long before I’m out of bed.

I never used to be so sensitive to the cat flap, but our night visitors have made me that way. I was warned though. A few years back, a friend of mine said, “You have a cat flap? That’s a mistake. You’ll have everything wandering in.” I pooh-poohed his warning. It wasn’t like we were going to send out invites to every animal on the block telling them about our cat flap situation, but someone must have spilled the beans.

Things started out innocently enough. The next-door neighbor’s cat, who had a thing for Royston and was in the midst of a territory battle with Streetcar, plonked herself on the kitchen table at 2:00a.m. and refused to leave. The following morning, after eating breakfast around a very hostile cat who was in no mood to pass the butter, we managed to get the owners to unpeel Taffy from the table. Things also became a little interesting when a black lab poked his head through after 4th of July festivities. Well, I thought that was going to be it. Unfortunately, a drought in nearby Wildcat Canyon forced the animal population into suburbia and straight to our house. A skunk was first. Finding that single-barreled butt-blaster in the kitchen was a surprise. Luckily, Royston chased it out into the yard where he then cornered it. Julie and I and Streetcar chased out there with broomsticks and a prayer that Pepé Le Pew wouldn’t do what his kind did. To an outsider surveying the melee, it must have had a cave painting look. Me, clad in underpants with broomstick in hand while my trusty hound closed in our prey. Thankfully for everyone, I got Royston away and Pepe got over the fence.

Soon after, a raccoon came a knocking with similar shock. A frightened raccoon in the corner of our kitchen at 4:00a.m. with a barking dachshund, a cat covering the cat flap exit and me, semi-naked, with my trusty broom. This was my first encounter with a raccoon and they aren’t as cuddly as depicted by Disney. They are smart and mean, packing some fearsome claws and teeth and they’re agile when riled. They are the Jackie Chans of the suburban neighborhood. It took some delicate negotiation to usher the raccoon into the garage, then open the garage door to release him into the neighborhood.

Our current nocturnal nemesis is a possum. These guys aren’t Disney cute either. Royston has cornered one twice recently and they aren’t backward in coming forward when it comes to being mean. Now Royston spends the night with his nose pressed up against the window watching for any trespassers.

Something got in the other night that scared the crap out of me. Royston chased it out of the house before I could see it but it got into our redwood tree, made the most God awful high-pitched keening wail and made the 20-foot tree shake. Julie and I gathered up Royston, ran back into the house and blocked the flap. We should have followed Streetcar’s lead, who is our battle scarred survivor of many a nocturnal brawl. He just sat on the bed and stared at us with that “I ain’t going nowhere near that one” look.

I never thought a cat flap would be so traumatic, but then again, I didn’t expect green ketchup either. Life is like that sometimes.