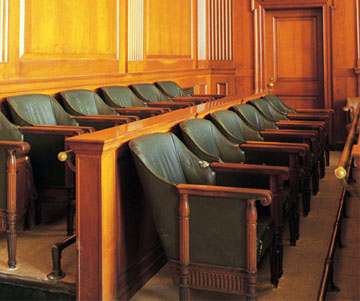 Have you ever noticed how jury selection is pitched to the proletariat the same way timeshares are sold? “Hey Bob, you’ve just won the county lottery and you may have won the chance to be on a jury. To claim your prize, just pop along to the county court house.” Julie tempted legal fate last week by saying it had been a while since she’d been called. She’s always been pretty lucky with these things. She gets her call up papers once a year and I’m not always far behind.Well, just like with the timeshare pitch, Julie’s usual response to the notification was one of annoyance and irritation, which seems to be pretty much the common reaction with everyone. I can’t say I’m any different. I can think of many other painful ways to spend my time than serving on a jury. Not only that, there’s a lot of pressure on you as a juror. You have to pay attention for a start. The hardest thing is that you have to decide the fate of another person. That’s some scary responsibility and power.Considering all that lawyers have to learn, are we (the general public) the best people to preside over a court case? What do we know and understand of the law? And saying you watch Law & Order on a regular basis isn’t good enough. In what other venue do we allow unskilled personnel to take control of such a serious undertaking? I don’t see nurses yanking people off the street to do brain surgery or airlines picking a passenger at random to fly a 747, so why have the decision of guilt or innocence placed in the hands of laypeople?Combine that with the fact that most people consider jury duty to be such a hardship, I don’t fancy anyone’s chances of a fair and well-reasoned trial. Any of us could end up in court fighting for our livelihood and the last thing any of us want is twelve pissed off people who couldn’t come up with a decent enough excuse to get out of jury duty. It’s not exactly the justice system our forefathers imagined. Remember, the judge won’t save us. All he’s going to do is slap a number on the proceedings. To me, a jury is a bigger deterrent not to commit crime than the various crime prevention programs the police currently have.This is my script for a TV commercial to be broadcast nationally to scare us straight. Here it is:“Trial by jury is a right of everyone in this country. You’ll be tried by your peers–objective people who have nothing to gain or lose from your case. Meet your jurors:”“Juror #1 was meant to be in Maui this week.”“Juror #2 didn’t get beyond 5th grade and needs help tying his laces.”“Juror #3 thinks J-walking should be a capital offense.”“Juror #4 will go with the flow and agree with the majority.”“Juror #5’s car was stolen last month and no one was caught. This is payback.”“Juror #6 knows you did it just by looking at you.”“Juror #7 will base your guilt on a coin flip. Heads or tails?”“Juror #8 thinks evidence is overrated. It’s all about gut feel.”“Juror #9 has fifteen cats and doesn’t think you look like a cat person.”“Juror #10 hopes to hook up with Juror #9.”“Juror #11 hasn’t been listening.”“Juror #12 and foreman is the actual perpetrator of the crime you stand accused of and isn’t in the mood to confess.”“Now, you’ve met your jury. How confident are you they’ll do the right thing?”If this ad went out, crime would cease in a week.I know the court system is a symbol of our democracy, but can’t we palm the responsibility onto someone who likes this sort of stuff? Justice, she may be blind, but the rest of us, we’re just blinkered.