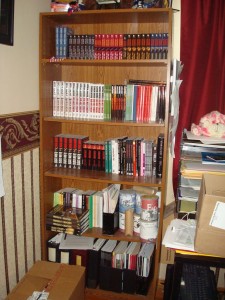 I reached a landmark the other week. I filled the bookcase in my office. Not hard to do I hear you say and that’s true, but it’s filled with books I’ve written and magazines that feature articles and stories by me. It’s quite a milestone, but it’s also an odd one. I feel a little bit of a disconnect between those books and me. Part of me says, “Hey, I wrote those. That’s cool,” and part of me says, “Hey, I wrote those. Hmm, really?” I guess I’m a little conflicted about my writing. I’m proud of what I’ve written, but at the same time, I’m still self conscious about my work. I’m a still a fanboy when it comes to books and I get excited by books and authors I admire, but when it comes to my books, I still think I’m not in their league. It’s no different when I’ve seen my books in the bookstore. I see them on the shelf or display and I smile, but it’s quickly followed by a blush.

I suppose I’m too close to my work. I can’t view it the same rarefied air as I can with other people’s books. More than likely, most authors feel that way. I guess it’s because a book is like a house. I built it from the dirt up and while the rest of the world sees a house, I see all the difficulties I went through in its construction.

I’m not sure I’m making much sense with this admission. Mainly because I can’t quite put a finger the emotion, probably because I’m experiencing two of them at once—glee and embarrassment. I blame being English. Boasting is an outfit that never quite fits. I don’t think my people have the shoulders for it.

So feelings aside, I find myself with an even trickier situation. I’ve filled the bookcase and there are more books coming down the pipe and that means (and to misquote Richard Dreyfuss in Jaws): “I’m going to need a bigger bookcase.”