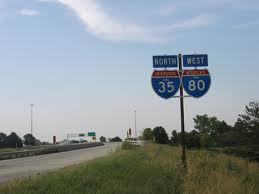 I get asked by a lot of people if I’ll ever leave the US. Well, I hope they are just asking and not hinting. Actually, I’m not sure whether I’ll leave the US, I never plan that far ahead, but that said, I’m not sure I can leave. It’s the roads, you see. They lie to me. America’s deceptively simple, well-organized and inviting road network promises to make driving a breeze. Most city centers conform to a grid format. The grids are divided into equi-sized blocks, each block being a 1/16th of a mile. And a marvelous network of highways and freeways connects the cities. It’s a utopian vision.

But it’s all a fallacy.

I will state, here and now, that the American road network not only defies logic but also breaks the laws of physics. The US roadways seem to be some sort of land-based Bermuda triangle. One day, I know I’ll see Jimmy Hoffa, Elvis and a World War II bomber crew walk into a Denny’s in Hollister and none of them will have aged a day.

“But what proof do you have?” I hear you cry.

Plenty is my reply. Road signs are all the proof I need. Here in the Bay Area, I-80 and I-580 merge. The road signs will confidently announce that I’m traveling west on I-80 while at the same time, I’m traveling south on I-580 on the same stretch of road. How can this be? How can I be going in two directions at once? And which is correct? Probably neither. I’m heading east for all I know. But this isn’t an isolated occurrence. Driving to Santa Rosa on 101 North, I find I’m also driving on Hwy 136 east. Leaving south San Francisco a month or so back, I wanted join 101 North, but the road sign pointed left and straight ahead at the same time. I-580, 680 and 980, the freeways that serve the city, have plenty of off-ramps–but no on-ramps. I can’t tell you the number of times I’ve tried to leave Oakland only to find myself driving for miles on abandoned roads that lead nowhere before finally finding a ramp to rejoin the freeway. I’m sure the city of Oakland is populated with people who ended up there and could never find their way back. It’s like a bad episode of THE PRISONER, without the number system.

I’m not sure who’s done this. Someone out there is controlling us, deciding where we will go. Some might think it’s big business bribing local government to funnel us in the direction of their stores, but I don’t think so. If I had to guess, I’d say there may be a more supernatural element controlling America’s roadways. I don’t think it’s a coincidence that American interstates bear an uncanny similarity to ancient ley lines linking us with powerful forces. And who is CalTrans–California’s department of transport or a Lovecraftian beast whose true name cannot be spoken by the human tongue? I’ll let you decide the next time you’re gridlocked during rush hour.