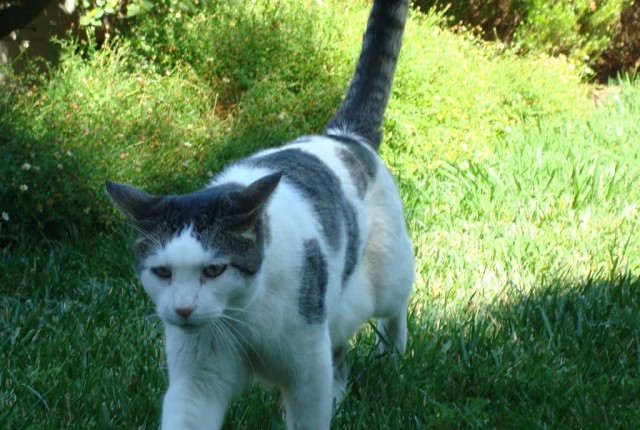 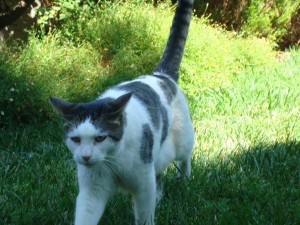 I live with a cold blooded killer. I haven’t turned him into the cops because he’s my cat, Tegan.

He’s on a roll at the moment. It’s spring and that means young and inexperienced creatures are poking their heads from their protective homes and Tegan is there to bite them off. I spent last week picking up the chewed remains of mice, rats, birds and a lizard. As soon as I’d drop a carcass in the trash, he’d have the remains of something else dangling from his jaws.

He’d look at me with a typical cat arrogance that said, “Yeah, right.”

After I’d dealt with his latest trophy and sat down, he joined me on the couch for cuddle and a purr (okay, I purr. It’s what I do). I stared into his big eyes and I looked for a sign of remorse and obviously saw none. Morally, he wasn’t doing anything wrong. He’s an animal and his genetic code is programmed with the need to hunt and kill—irrespective of how much kibble I give him. He’s doing what he’s supposed to do. But he takes lives on a pretty regular basis without a hint of killer’s repentance.

That chilled my human sensibilities.

Transpose Tegan’s killer instinct to a person and that person wouldn’t be a cute, furry companion, that person would be a psychopath, no ifs or buts. Tegan can wander in from a kill, snuggle up to me for companionship then clean up the two kittens he’s rearing. Sounds cool for a cat, because we accept this as cat behavior, but we don’t accept this behavior in all things. Substitute a person for Tegan and Tegan’s behavior would present a very different picture. Imagine a father like any other caring for his family while there is still blood under his fingernails. This is serial killer country.

People always ask, ‘where do you get your ideas?’ I don’t have to trawl through the aisles of the true crime section to learn about killers, or even experience terrible events. Sometimes, I don’t have to leave the house.

Stories are out there waiting to be discovered. Anything and everything can be the ignition source for a story. It’s all about watching the world around me and seeing how things interact and what everyone else misses. Usually, it’s the little things that people miss that make for the best stories. With a little ingenuity, the mundane can become the extraordinary.

So Tegan could be the genesis for a very nasty killer. All it takes is a little imagination and a dash of transposition. 🙂

Yours on golden pondering,
Simon

One Response to “Book of the Month: Killers Ideas”