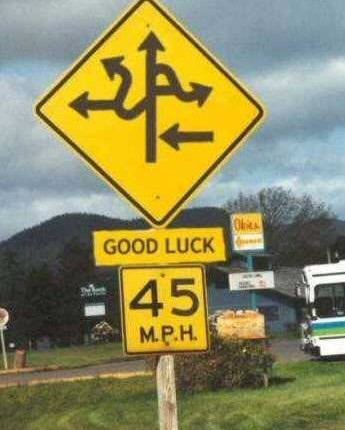 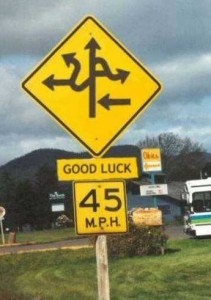 For a borderline spaz such as yours truly, the US road systems are a godsend. There’s a logic behind them all that makes it easy for a stranger like me to navigate—with the exception being freeway on and off ramps. This is where American roadways fall down. You want to get on the freeway heading east? No worries—head west for three miles, turn around twice, Evel Knievel it over a broken bridge, detour through México and buy three oranges from a man with an eye patch, then merge with the flow of traffic.

What makes the rest of the system great for a Johnny Foreigner, like me, is that most cities number or alphabetize their streets. 5th Street will follow after 4th Street and C Ave will come before D Ave. It’s simple and effective. Bravo American road planners! This all works as long as those planners don’t just think about today, but tomorrow and the day after. They have to think to infinitum or the system breaks down.

This became abundantly clear last year when I drove down to Fresno to speak to the San Joaquin Valley chapter of Sisters in Crime. That’s about a 400-mile round-trip for me, so I drove. I didn’t mind the drive. It was a chance to see parts of California I don’t get to see often. The deeper I drove into the valley, the higher the heat climbed. By the time I joined I-5, all the fields had turned yellow. The bristling hills looked like they’d been covered in teddy bear pelts. Things turned a little freaky when I reached Los Baños. On CA-152 turnoffs came thick and fast for Road 2, Road 3, and so on. I did a double take when the road sign pointed me in the direction of Road 15 ½. How very Harry Potter, I thought. Am I on my way to Hogwarts and not Fresno?

I giggled to myself at my very original humor and drove on. Giggles stopped when the next sign announced Road 15 ¾. How very wrong, I thought.

Oh dear, I was driving through faux pas country. After Road 15 ¾, there were a string of fractional streets. Things had gone very awry. Unfortunately, when this happens, there’s no going back. You can’t renumber the streets or you’ll have frustrated mail carriers opening up with automatic weapons. Oops, that’s already happened. Did anyone check into a possible link to the renamed streets angle during the investigation?

It doesn’t get any better with alphabetized streets either. Everything looks pretty sweet when it comes to A Street, B Street, but what if Jim in planning is dyslexic and misses a street? You are forced to squeeze in a street name, but what—A ½ Street? For example, in between 17th and 18th Streets in San Pablo, there’s Tyler Street. Oops! And although I like my alphabet cities, the value of the lettering system runs out pretty quickly. There are only 26 letters in the alphabet. Then what—AA Street? Hmm, a street like that is asking for trouble. People are going to turn up to meetings for that. Even if a city preserves and goes along with its BB Street and CC Street, and so on, it’s likely speech impediment groups are going to think this is an elaborate joke at their expense.

So let this be a warning to any budding urban planners out there—think before you create your conurbations. But don’t think too hard. I could do with the laughs.