Simon Wood's Web Hideout » Blog » Book of the Month: You Made Me A Criminal 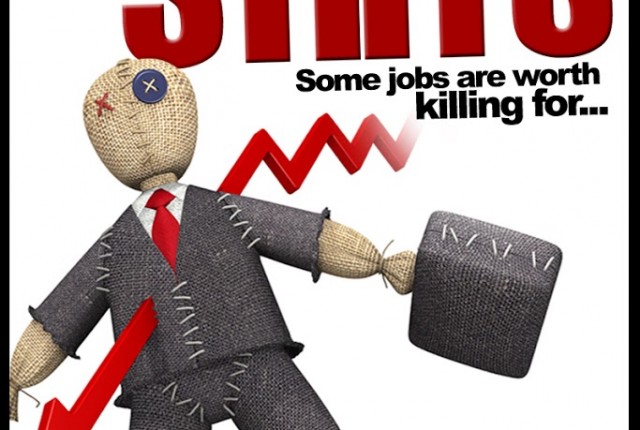 Some people give me odd looks after they’ve read something of mine. They see me, they read the stories and they merge the characters and me together and see the same person. They don’t see easy-going, Simon. They see evil-doing Simon. I’m not evil doing. I’m actually very nice. I rescue animals off the street, I pay my taxes and I’ve never held up a bank (well, not in California and besides, I was very young).

Consider this quote from Cemetery Dance for WORKING STIFFS: “Consistently surprising and well-written, Working Stiffs proves Simon Wood is a criminal genius. We should all be glad he’s writing this stuff and not doing it.”

This isn’t the kind of quote I should have on a tee shirt when I visit the FBI.

That’s the problem. Readers blur the lines between the characters we scribblers create and the scribblers. I’ve been told on several occasions that I’m not a nice person based on my stories. I’ve been asked if I’ve cheated on my wife when they’ve read about a character’s infidelity. As shocking as these statements can be, I can understand them. I’ve said myself. When I tell a story, I don’t base my characters on people I know or people I’ve read about, but I place myself in the shoes of those characters and view the world how they view the world. So for all intent and purposes, I am the good guys in my stories and I’m the bad people in my stories.

But that doesn’t make it me.

I’m not living out my fantasies on page because I fear capture if I committed them in the real world. I’m not outlining my future crimes. I’m not a depraved person getting my kicks on paper. I’m nice, easy going, animal rescuing Simon. But I can conjure up crimes and motives for killing and invent people react to those circumstances and I am empathic to their sensitivities. If I was faced with the crisis of conscience that a character is faced with, I can see their point of view and follow it. that character can be a good person doing the wrong things for the right reasons or a bad person doing the wrong things for the wrong reasons. I can see it from their perspectives. But am I like them? no. would I act like them if their position? Perhaps. But the people on the page aren’t me. a lot of writers I’ve met and befriended are nothing like the people they write. Most horror writers I know are some of the most down to earth people I know. Eavesdrop on conversation at any World Horror Convention and you’re going to hear them talking about pets and their kids and not how to dismember a body a dozen way from Sunday.

Granted, characters are the writer’s alter egos and altered egos. They are the people they would like to be, possibly, but they are also the kind of people we wouldn’t like to be. But at the end of the day, there is a big distance between the writer and his darker characters—well, certainly in my case. I cant speak for everyone.

At the end of the day, I’m a storyteller and like Marvin Gaye says, I need every kind of people to tell my tales and that includes the bad ones. So the next time you read a nasty character and you start comparing the writer to that character, put some distant between the two. I know we do.

2 Responses to “Book of the Month: You Made Me A Criminal”