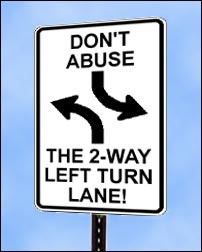 The suicide lane is the quaint name for the turn lane. It’s a pretty clever device. Instead of dozens of dedicated turn pockets in the middle of the road, there’s a central lane, which can be used by vehicles in either direction (hence the suicide reference) to get into to make a left turn. These are great when you have a commercial street with lots of entrances into businesses. Well, they would be great if the people where I live understood how they worked.

Some people seem to view the suicide lane as devil’s magic. It may have something to do with all that yellow striping. These poor souls have an aversion to entering this lane as if crossing into it will cause their heart to stop. These people are so afraid of the suicide lane they would rather block two lanes of traffic than set a tire inside the suicide lane. They wait until a suitable line of traffic has built up behind them (somewhere in the range of the Macy’s Thanksgiving Day parade) before zipping across the suicide lane in front of a bunch of oncoming traffic. 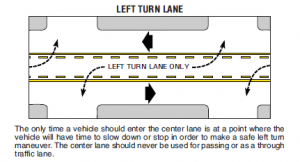 Then, of course, there are the people who are quite happy to use the suicide line–all of it. Somehow the yellow striping signifies that this lane belongs to them and it’s free to be used as a private highway. They are more than happy to travel for miles in it, swerving around other vehicles who are rude enough to use their personal lane.

So suicide lanes are great things, but another example of when good ideas go bad. Remember I’m the outsider in this scenario. Don’t make me come down there and show you how its done.