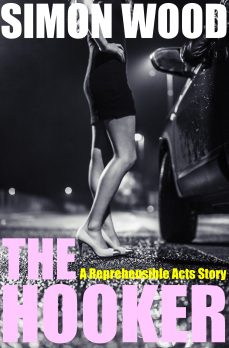 Mark was content to see out his single days with a bachelor party, but his best man, Lance, wasn’t.  He insists in sending Mark off in style…in the company of a hooker.  It’s supposed to be the last hoorah of a single man before being condemned to a life of marriage, but that all changes when the hooker scams them.  Mark’s world unravels and a dark side he never knew he possessed spills out.

The Reprehensible Acts series features stories without heroes or happy endings in most cases.  These stories feature characters that lose their way and may never find their way back.  You can’t condone their actions, but perhaps you can have sympathy for their damaged souls.  You might find these stories unpalatable, but then again, you’re not meant to.  Don’t judge.  No one is immune to committing a reprehensible act.

My bachelor party came to a bleary-eyed end around two when the bar closed and the refugees of the event, a dozen of my closest friends, spewed onto the sidewalk.  The night had been the usual affair of too much drinking, a strip club and the obligatory lap dance.  The bar’s security had called cabs for us.  As the taxis rolled up, we were all more than ready to go our separate ways, hoping to be sober enough for Saturday’s wedding.  Lance, my best man, was the exception.  He’d been tossing around his theory all night that it was every condemned man’s duty to bang a hooker before getting hitched.  Nobody had the stamina for the last hoorah and everyone tried to shout Lance down, but he wouldn’t stop harping on about prostitutes.  The last cab pulled up and I went to get in, but Lance waved it away.

“Sorry, cabbie.  You’ll have to find another fare.  My boy, Mark here, still has work to do.”

The taxi driver shook his head and roared off.

“We have to find you some pussy, my man.”

“Lance, no.  I’m too wasted to know fact from fiction.  I’d be no good to a hooker.”  Alcohol wasn’t the reason for my lame libido.  It was the fact that sex with a prostitute was something I just wasn’t into.  I found something about paying for sex, depressing.  Superficial love or lust held no desire for me.

“I’m not interested.  I’m getting married.  The last thing I need is AIDS or some other kind of dick rot.”

It was my turn to shake my head.  “Whatever.”

So yes, I agreed to the hooker hunt.  Not because I buckled to Lance’s peer pressure but instead, betting on the improbability we’d actually find one before Lance lost patience or a hooker would find two drunken idiots as acceptable clientele.  I didn’t know much about prostitutes, but my guess was they wanted a simple transaction with an interested party.  The last thing they needed was two wasted jerks.

Lance guided me to his Cherokee.  He was just as drunk as I was and I shouldn’t have let him drive, but he was a grown man capable of making his own decisions, regardless of how blurred by alcohol they were.  Besides, if a cop picked us up, it would be the end of our hooker search.

We trawled the south end of Delaware Street.  By day, it was a bustling commercial district, bristling with office building after office building wedged up against one another.  This was where Lance and I, and most of my buddies, worked.  But when the sun went down, a different kind of business took over.

Prostitutes hung out on street corners around the block.  The prettier ones clustered under the streetlights.  The not so pretty ones used the shadows for cover.  If you were innocent, you might have wondered why so many women hung around in clumps, especially when no buses ran down Delaware.  But if you had any street smarts, you knew exactly what they were there for.  Not too many were dressed like movie hookers, with feather boas and the like, but nothing was concealed.  Skirts were a little too high, makeup a little too heavy and stares a little too searching.

We weren’t subtle about our approach either.  Alcohol collided with adrenaline to make a volatile cocktail.  Lance powered down the windows and hollered at the prostitutes, spewing infantile abuse that wouldn’t have been acceptable from construction workers.

It wasn’t surprising to see the hookers retreat into the shadows, hurling obscenities back our way.  Nobody wanted our kind of business.  In retrospect, we were damned lucky that Delaware didn’t have any undercover vice working the street.

As the parade of prostitutes ended, we turned off Delaware and onto J Street.  My euphoria died and I thought my brush with a hooker was lost.   But it wasn’t.  It was just beginning.

Lance was slow correcting his turn and wandered across two lanes before getting affairs under control.  I have no idea what speed we were going but it must have been slower than I imagined or she wouldn’t have caught up with us.  Before Lance had a chance to accelerate, something struck the car from the rear.

“Jesus,” I said, cowering more out of instinct than necessity.

Lance slammed on the brakes.

She was in the street, yanking repeatedly on the rear passenger door handle.  She had a decent figure—tall, slim, a little flat-chested, and narrow in the hips, but her face was nothing to write home about, even with God knows how many shots of Jack Daniels I’d knocked back.

But as I think of it now, maybe Lance was playing it smart.  Late at night, you don’t know what stunts might be pulled.

Lance looked behind her.  “I don’t see anyone.”

Panic ravaged her features, making her uglier than she was.  She glanced back over her shoulder.

“Let her in, Lance,” I said, fancying myself as a knight in shining armor.  She might have been a hooker, but she didn’t deserve a beating.

Then I did the dumbest thing in my life.  If I’d told Lance to punch it right then, the world would have been a different place.  But I didn’t.  I flipped the lock release on the back door.  Why I did it, I don’t know.  Maybe I thought I was being a hero, trying to impress a woman, albeit a hooker.  Before Lance could react, she had the door open and was on the back seat.

The answer wasn’t a shocker and neither was the reason.

“He wants more money.  He thinks I’m holding out.”

“Where can we drop you?”  Lance asked.  He was strangely aloof.  He wasn’t happy with me, I could tell.  The look on his face said he didn’t want to get mixed up in any fucked up business that had nothing to do with him.  And I couldn’t say I disagreed.

Lance eased the Cherokee over to the side of the street.  “Be careful now,” he said without much affection.

“Thanks,” the hooker said.  “I wish there was some way I could repay you.”

A leer spread across Lance’s face.  “Actually, there is something you can do.”

I guessed what he would say.

I realized we’d been conned.  There probably was a pimp, but not one after her blood.  She was never going to be the pick of the bunch, not with that face.  So, she needed an in, a way of getting a John.  And she had one.  Who could resist a damsel in distress?