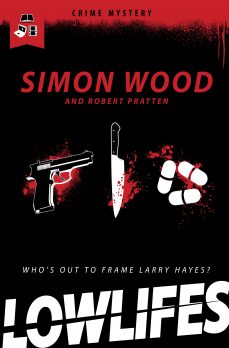 San Francisco Detective Larry Hayes thinks he’s hit bottom when he wakes up in an alley after a bad trip with no memory of the last four hours.  This is only the beginning of his problems.  Two blocks away, Hayes’ informant, a homeless man named Noble Jon, lies dead, beaten and stabbed.  The eerie pangs of guilt seep into Hayes.  Is he Jon’s killer?  The mounting evidence says so.  Hayes mounts his own investigation to stay one step ahead of murder charge and disappears amongst the city’s homeless community.

For the story behind the story, see When the Chips are Down.

LOWLIFES is now available in paperback, ebook and audio download.

The touch of a hand reaching inside my jacket jerked me from unconsciousness.  I swung at the figure crouched over me, but he jumped clear of my fist.  I reached for my service weapon and grabbed my badge instead.

I clambered to my feet.  The fog inside my brain pushed me back down onto my knees.  I stared at the thief’s Cuban heeled cowboy boots.  Who the hell wears Cuban heels in San Francisco?

The figure retreated then broke into a run.  I tried to make out his face, but the nighttime alley gloom and the pounding in my head reduced my light-fingered friend to a blur.  He wasn’t worth it, so I let him go.  He hadn’t taken anything and I was in no position to call it in.  Junkie cops, even functioning ones, had no friends at the Hall of Justice.

I grabbed the dumpster next to me and ignoring the feted stench leaking from it, hauled myself to my feet.  My body felt like a lead weight.  I couldn’t decide if my muscles had lost all their power or my bones had gone soft.  My back hadn’t hurt this much since I’d busted it up on the job a few years ago.  I’d never suffered a crash like this.  Ludo’s pills were supposed to be pharmaceutical grade.

I reached inside my pockets.  What remained of the oxy Ludo had sold me was gone.  Goddamn it.  That punk had robbed me.

My vision cleared as my brain finally took the reins.  I took in the alley around me and the streetlight-lit world sliding by at the alley’s mouth.  None of it was familiar.  How the hell had I gotten here?

I pressed a hand to the wall and staggered towards the street.  Moving did me good.  I felt almost human by the time I reached the alley’s mouth.

I didn’t have to be told I was in the Tenderloin.  All the familiar sights and smells of San Francisco’s less-than-favored neighborhood drifted by me.  The sidewalk under my feet was slick.  There was something about the sidewalks around here.  They always felt greasy, ingrained with the dirt and grime of a hundred years of people leaking their desperation onto the streets.  I didn’t look out of place.

A homeless guy, his black skin as tough as leather, decided I did.  He stuck out a hand.  “You got a dollar for a hungry man?”

I reached for my wallet and peeled off a five.  “Yeah.  Always.”

“Thank you, brother,” he said, then took the bill and shuffled on by.

Christ, I had to get myself out of my nosedive or I would be a review board hearing away from joining my new friend.

I glanced over at the nearest street signs.  I was on Leavenworth between Post and Geary.  Yep, I was in the Tenderloin just a handful of blocks over from City Hall.  The problem was, I shouldn’t have been here.  I tried to retrace my steps in my head and kept getting lost.  I just knew the Tenderloin hadn’t been on my agenda.

I checked my watch.  My hand was a mess, knuckles bruised and swollen.  It looked as if I’d been punching a concrete speed bag.  Pain had yet to filter through to my brain.  I brought up my right hand.  I’d been just as careless with it as I had been with its twin.

The sight of my hands failed to strike fear into me as much as the time—seven after midnight.  I was expecting to see eight-thirty or nine at the very latest.  Somewhere along the line, I’d lost four hours.  I left Ludo’s at eight.  I remembered that much.  I also remembered feeling bad not long after.  I was on my way to see my daughter, Victoria.  Ah, crap.  She’d be crushed and it would give Jennifer extra ammo for her sole custody demands.  Tonight was a makeup night for missing Saturday’s visitation when I’d used work as a lame excuse.  It was half-true.  Kinda.  I bet Jennifer knew all about that from the PI she had looking into me these days.

Had I been crashed out in the alley for four hours?  If I ever needed a wakeup call, here it was.  It was time to assess the damage.  I hurried along Leavenworth and ducked inside an all night liquor store.  An overripe alcoholic who smelled as bad as he looked was embroiled in fruitless haggling with the store’s Pakistani owner.  A couple of likeminded individuals watched the ensuing pantomime.

The owner frowned at me.  “No customer facilities.”

The announcement stopped all conversation.  The frown failed to leave the dark-skinned storeowner’s face, but he jerked a thumb at a doorway behind the counter.

The storeowner watched me enter a bathroom consisting of a sink, a toilet and very little breathing space.  I smiled, then closed the door.

The tight confines put me up close and personal with the mirror above the sink.  A train wreck stared back at me.  The naked bulb hanging above my head highlighted a massive fall from grace.  I’d always looked young for my age, but at that moment, I looked older than my forty-two years.  My narrow faced had broadened and showed the early stages of jowlhood.  If I’d hit someone, someone had hit me back.  A red bloom rouged my right cheekbone.  It was faint, even under the harsh light.  I stripped off my shirt and jacket.  The mottling of more developing bruises made a patchwork of my ribs and chest.  I wasn’t sure who’d come off worse in my fight.  Pride said the other guy, but the memory of coming to in an alley said otherwise.

I washed my hands in the sink, turning the water rose-colored.  The tepid water burned every inch of my broken skin.  I gritted my teeth against the pain and washed the blood free.  I drained the sink and refilled it.  I dunked my head, soaking my hair, then washed under my arms and across my chest.  A whore’s bath, I remembered my father’s calling the slipshod attempt at cleanliness.

I dried myself off with paper towels and combed my hair back with my hands.  I felt marginally better than I looked.  If I went straight to bed, I stood a good chance of passing myself off as a member of the human race come the morning.  I pulled my shirt on, not bothering to tuck it in and slipped my jacket back on, then let myself out of the bathroom.

The storeowner’s frown had intensified.  He jerked an arm out at his now empty store.  “Look what your announcement has done.”

“What, cleared out your unwanted clientele?  Don’t worry, no extra charge.  All part of a day’s service.”

“Unwanted or not, they would have bought something, officer.  You should buy something to make up for driving my business away.”

It was on the tip of my tongue to say they’d be back, but instead, I said, “Sorry, I’d love to, but I’m working.  Thanks for the use of the bathroom.”

I walked out to grumbled curses of a foreign language.

Street side, it now occurred to me, I didn’t have a clue where I’d left my car.  Could this night get any worse?

All I could do was backtrack my steps.  My starting place was Ludo’s.  He lived over on Post and Hyde.  A fifteen minute walk at best.

My cell rang.  I pulled it from my jacket pocket.  Lieutenant Grieves’ name appeared on the display.  He ran Homicide’s night shift.  If he was calling, he wanted something.

“Larry, sorry to call you so late, but I need you on a situation.”

“What do you need?” I said, injecting some enthusiasm into my tone.

“Jonathan Barnes is your boy, isn’t he?”

“Yeah, Noble Jon is one of my informants.”

“Deader than the tech boom.  Stabbed about an hour ago and left to bleed out.  I need some background.  Can you drop by?”

Just a block and a half from where I’d slept off the last few hours.   The coldness turned to a chill.

"Simon Wood, juggling all the media balls here, has created a terrific pulp-fiction piece that reminds us just how easy it is to fall off life's tightrope.”

"Inspector Hayes, a complex, likable cop, finds himself in a world of trouble. Lowlifes grabs you on the first page and is nonstop action to the end.”

"Simon Wood has done with Lowlifes is a whole new take on the reading experience. The thriller is riveting in and of itself, but partnering it with videos that provide another lens on the story was nothing short of brilliant."

— Mark Coggins, author of The Big Wake Up

"Simon Wood's inventive and original LOWLIFES takes you on a tour of San Francisco no tourist gets to see. The ride's as thrilling as a high-speed chase down Lombard Street, and just as twisty. Don't miss it!”