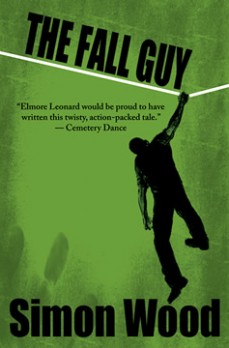 Todd Collins has failed in every job he’s ever undertaken, but that all changes when he backs his jalopy in a shiny, new Porsche belonging to a drug dealer. When the police stop the drug dealer for a broken taillight that Todd has caused and discover a cocaine shipment, a West Coast kingpin holds Todd responsible. On the run from organized crime, Todd discovers his true calling when he fights back.

When you’re down on your luck, life never wants to cut you a break.

THE FALL GUY is an ebook original but is now available in paperback from Comet Press and as an audiobook. Please note there are two ibookstore links, one for the ebook and the other for the audiobook.

Todd raced back to his car, cursing the ATM all the way. Why was there always a line? His job packing boxes for a firm in Oakland wasn’t much, but he didn’t want to lose it by being late again. They’d find a way of firing him sooner or later anyway. Although a monkey could do his job, they’d be better off hiring one. His workmanship, even by his own admission, sucked. But this was his plight. When it came to him and jobs, they never lasted. Okay, he lacked the interest, but irrespective, he also lacked the skill set for any job he undertook.

He hopped back into his car, glad not to see a parking ticket glued to the windshield, and crunched it into reverse. The Honda Accord was way overdue for an overhaul, although an overhaul wouldn’t do much for its ancient transmission. It was toast. Half the time, he didn’t know what gear he was selecting. The Accord stuttered in the parking spot.

“Get in there, damn it.”Gears snarled as Todd struggled to find a forward gear. He jumped off the clutch and the car leapt backwards, slamming into a Porsche Boxster’s headlight.

His antics had drawn quite a crowd and they’d all witnessed his screw-up. Nowhere to run, he thought. He found first gear without effort this time and eased the Accord forward to assess the extent of the damage.

Everyone had an opinion and had no problem telling him where he’d gone wrong and how much it was going to cost him. He crouched in front of the Porsche and picked at the broken headlight and buckled bumper. There was a couple hundred dollars of damage to the average car, but on the German exotic, he was looking at thousands. His car, the piece of shit that it was, didn’t exhibit any signs of damage—just like Todd, who didn’t exhibit any signs of insurance.

“Does anyone know who the owner is?” Todd asked.

“You’ll have to wait,” someone suggested.

“I don’t think you have much choice,” someone else said.

“I can’t. I’ve been late twice this week already.” Todd delved inside his car for a scrap of paper and a pen. “I’ll leave a note.”

He wrote: People think I’m leaving you my contact and insurance details. I’m not. Sorry.

Todd folded up his note, wrote sorry on the outside and stuck it under the windshield wiper. He shrugged, hopped inside the Accord and raced off.

He felt guilty for shafting the Porsche driver, but at the same time, he was buzzing with the thrill of his lawlessness and his speedometer showed it. He was accelerating past forty-five on Telegraph. He took a deep breath and eased off the gas.

In the scheme of things, what he’d done wasn’t so bad. It was an accident and it was more likely the Porsche driver’s insurance could afford the repairs than he could. Anyway, with a car like that, he thought, you’re asking for trouble. Todd pulled into his employer’s parking lot safe in the knowledge that the matter was over.

Todd liked to take Sunday mornings easy. He lounged in bed until ten then took a walk to the newsstand to pick up the Sunday paper. He wandered back through the apartment complex, pulling out the color supplement and flicking through the magazine, ignoring the front-page splash about some big drug bust. He took a different route back to his apartment and passed close to his assigned parking space. He slowed as he got close to his car. At first, he’d thought his windows had steamed up overnight, but the weather conditions hadn’t been right for that. As he closed in, he realized he’d been way off. Every one of the Accord’s windows had been smashed and all four tires had been slashed. He ran a hand over the scarred paintwork. A hook end of a crowbar protruded from the front windshield, and a note was sticking out from under a wiper. He pulled it out and read it. “Guess who?” it said.

Todd didn’t need to guess. He knew who had done the damage. It was the Porsche owner. Todd hadn’t forgotten about the fender bender, but it had been days since it happened and he thought it was over, a stunt that would dissolve in his memory over time. Well, he just found out his stunt was insoluble.

He’d screwed up this time. Someone must have taken down his license plate before he’d driven away. He was going to pay big for this one. He tugged out the crowbar and tossed it on the backseat through a glassless side window.

“Mr. Todd Collins, I presume,” the small man said, getting up from Todd’s couch.

Two linebacker types, one black, the other Hispanic, flanked the small man. The small man seemed genial, but the linebackers looked ready to tear Todd’s head off. He could have bolted, but judging by the bulges under the three men’s jackets, he didn’t expect to get far. He guessed he was meeting the owner of the Porsche.

“I’m Todd Collins.” Todd stepped inside the apartment and closed the door.

“Do you know who I am?” the small man asked.

Todd went to say, “The Porsche owner,” but decided against it. He thought it best not to antagonize the situation any more than he had already. He shook his head, finding that his vocal chords had failed him.

“Good. That makes things simpler. It’s probably not a good idea that you do. It’s only important that I know who you are. Understand?”

The small man held up a hand and shook his head. “It’s far too late for that.” He looked Todd up and down. “Besides, I doubt you could afford to pay. The damage is incidental, but the consequences of your misdemeanor have been severe. Put the newspaper down.”

Todd, confused at first, hesitated before doing as instructed. He placed the newspaper on the chipped coffee table. The small man separated the newspaper from the supplements and opened it out. He tapped the front page with the back of his hand.

“The car you hit belongs to an employee of mine. Driving home the other night, he was pulled over for a busted headlight. The cops discovered two kilos of cocaine in his possession. He’s in a lot of trouble and I’m minus an employee, not to mention a lot of money. Do you see now? Do you see what you’ve done and why it has led us to your door?”

“I wouldn’t expect you to know. But I’ve lost a valuable employee who had a job to do. Now he can’t do it. This is where you come in.” The small man stabbed a finger in Todd’s direction.

Todd’s stomach twitched. He didn’t like what was coming. He knew it was retribution for what he’d done, but it wasn’t the kind he wanted. Points on his license and a fine he could accept. He’d even take a beating. But the small man’s kind of retribution filled Todd with dread.

The linebackers wrinkled their noses. They knew Todd wasn’t the right man for the job and he agreed with them.

The small man beamed. “That’s the attitude. These two said I was making a mistake.”

The small man dug in his pocket and threw a set of keys to Todd. Todd caught them and examined them.

“Those fit a black Jag. You’ll find it outside Danko’s restaurant in the city. Bring it to me in Oakland.”

“Oh, I like you. I debated about just beating the crap out of you, but I wanted to give you a chance to make up for your error and you’ve done that. You’ve assessed the situation and decided to stand by your mistake. I admire that.” The small man stood and dropped a note on Todd’s newspaper. “Bring the Jag to me tonight. Addresses are on the paper. See you at midnight.”

The black linebacker brushed Todd aside to open the door. It was a petty gesture, but Todd wasn’t going to tell him that.

Todd grabbed the small man’s arm on his way out. The small man stared at Todd, his look piercing. Todd knew enough not to touch him, but he didn’t care. He knew what was being asked of him was illegal. He just needed to know how illegal.

“Will I find drugs in that car?” Todd demanded.

The linebackers stiffened. The small man nodded at his arm. Todd released his grasp.

“Unfortunately, you don’t have a choice, Todd,” the small man said, his tone barbed. “Be at the Oakland address at midnight.”

“Elmore Leonard would be proud to have written this twisty, action-packed tale.”

"Crime hasn't been this much fun or unpredictable since the second-story man John Dortmunder squeezed himself into a dishwasher.”

“What should have been simple revenge for a bad man turns into a clusterfuck with an unpredictable end.”

“For a novice reader of Wood's work, this is an excellent place to start.”