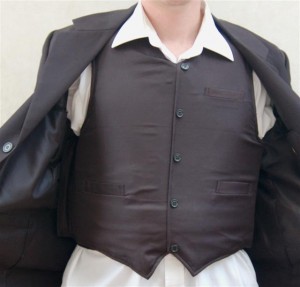 I’m not bulletproof. I hope to be one day but I’m not. I wound easily.

No, I’m not talking about being bulletproof in a percussion weapon way (so please don’t try shooting me) but in a literary way.

The topic of author “bulletproofness” came in up conversation with a couple of writing chums—one in person and one online. The discussion was around how some authors can have relatively poor reader reviews and still ship a boatload of books while writers with excellent reader feedback don’t get half the sales.

My answer was that successful writers are bulletproof. They possess a large and loyal enough readership to survive subpar reviews and still sell books. There are a few reasons why bestselling authors can sometimes have lower ratings but still have a bestselling book. The book is going to be read by a whole range of readers and no doubt people reading out of genre are going to rate it lower because it was never going to be their thing anyway. Name recognition comes into play too. People are more likely to pick up a book by a name they know than from one they don’t. There’s the numbers factor too. A book by a bestselling author is going to get more shelf space and by virtue of that is more likely to get picked up than one that doesn’t. It’s simple math, but the simplest math applies to the issue of a loyal and supportive readership. It is worth its weight in gold. A fan will forgive a book they don’t like and still buy the next one. That might seem weird but it’s not. We do it all the time. Nobody stops listening to their favorite band because you don’t like their current single. Nobody stops supporting their favorite sports team just because they lose one game. The same with loyal readers, they will forgive a book they don’t like and keep reading. That’s not to say you can get away with that long term. No writer can continue to turn out duds long term and still keep their loyalest of readers. Even bulletproof glass can only take so many shots.

One of the writers suggested I was ‘set’ in that I had attained bulletproof status. I had to disagree with that. I have been both fortunate and lucky over the last few years. I have sold significantly more books than ever before. I have a ‘following’ but it’s far from significant enough to help me weather a review drubbing. I know this from harsh experience. One of my books went on a bad run of reviews and it hurt my sales to the extent that it took over a year to recover. Oddly, that book has recovered its review rating and now remains one of my better selling books. How I wish I had been bulletproof during that period.

But at the end of the day, it doesn’t matter whether I’m bulletproof or not. I owe it to the book buying public to write the best book I can and I hope it will be embraced because of it. Now that’s the true definition of bulletproof.