Today I’m turning my blog over to my good chum, Dana Cameron.  We’ve known each other a long time since our first books came out the same year and we did a reading at Bouchercon.  So it gives me great pleasure to give her a little space to discuss her latest.  Take it away, Dana! 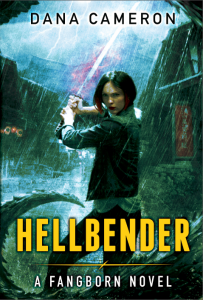 Like my esteemed blog host, I draw a lot of my writing from my experiences, in particular, travel, museums, and archaeology.  So I figured I’d share a few elements of my new Fangborn book, Hellbender, that had their roots in my life.

For example, I once had a very “Buffy the Vampire Slayer” day in Istanbul.  We were exploring the Old City with a very knowledgeable tour guide.  At one Greek Orthodox church, the priest and guide offered me some of the water from the holy spring—to drink.  Now, I’m usually pretty careful about my water when I travel, and was caught between being a good guest and not being imprudent.  I drank it, under their approving looks, and surrounded by wonderful ancient icons.  The rest of the afternoon was spent wandering through ancient sites, and the Basilica Cistern (where they, among other things, filmed “From Russia with Love”), with a bottle of holy water in my pocket.  A very touristy moment in some ways, but as a writer, all I could think was:  This is totally going into a book.

Another example.  Hellbender starts in Kanazawa, Japan, where Pack of Strays left off, mostly because of the wonderful things I saw on that trip.  One experience made a particular impression on me:  We observed a master calligrapher in action.  Now, I fooled around with calligraphy in high school, because I loved the pen, ink, nibs, and the different fonts, and I mention that only because it means I had a very approximate idea how much work goes into Western calligraphy, which is a whole world away from traditional Japanese calligraphy.  Watching this calligrapher work was enthralling, and the focus she was able to exert was a privilege to observe.  She said that she waits for her inspiration while grinding the ink at the start of the day, and sometimes, she spends all day grinding ink.  Every artist, every writer has been there.  And I have the piece she made for me, in a very traditional style:  it reads monogatari or “narrative.”  I put a calligrapher into Hellbender, but with a very special twist to her work.

The last of many elements I cadged from real life for my work was from Alaska.  Many of you will remember the Anchorage Bouchercon in 2007; there was a program to fly writers into the bush, to small villages, to talk to school students about writing. I was lucky enough to participate, and only found out when I was en route that no one wanted to tell me that I was flying into “one of the ten most dangerous airstrips in Alaska.”  Just hearing those words made me want to write something, so I finally got to use it to move Zoe en route from Japan back to Boston.  There’s something about being in the middle of that wilderness, in a very small plane, that inspired a lot of emotion on the way in (mostly fear), but by the time I left, I was so excited about the plane ride that the pilot circled the little village so I could take pictures from above. 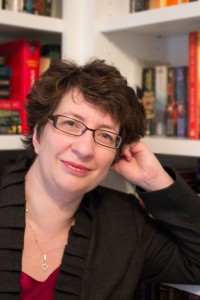 Bio:  Dana Cameron can’t help mixing in a little history into her fiction.  Drawing from her expertise in archaeology, Dana’s work (including traditional mystery, noir, urban fantasy, historical fiction, and thrillers) has won multiple Agatha, Anthony, and Macavity Awards and earned an Edgar Award nomination. Her third Fangborn novel, Hellbender, will be published in March 2015 by 47North.  Her most recent Fangborn short story is a Sherlockian pastiche; “The Curious Case of Miss Amelia Vernet.”  Her story, “The Sun, The Moon, and The Stars,” featuring Pam Ravenscroft from Charlaine Harris’s acclaimed Sookie Stackhouse mysteries, appears in Dead But Not Forgotten: Stories from the World of Sookie Stackhouse.   WWW.danacameron.com