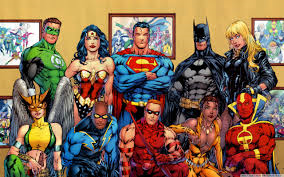 Julie reminded me that she’s still going through withdrawl for one of her favorite shows which got canceled, Heroes. If you’ve not seen it, it’s about the belief that people with special powers exist all over the world and in a time of trouble, these people will form together to rise up against a devastating evil. These are just ordinary people who exhibit the kind of special powers you’d find amongst the Fantastic Four or X-Men, but without the spandex and the need to wear their underpants on the outside. It’s all very thrilling.
The characters in Heroes have the ability to fly, heal themselves, predict the future, read people’s mind and stop time, just to name a few. All very sexy.
But that’s where the show falls down. They’re focusing on people’s super sexy superpowers. They don’t feature anyone with mundane superpowers. Mundane superpowers–is that an oxymoron?
People with mundane superpowers can make a difference too, you know. I suppose I’m a little hurt by the show, because they don’t feature a hero like me. I have special powers. I don’t like to brag about them or anything, but I have them. Sadly, those powers haven’t been incorporated in the show.
Unlike the superheroes in the show, I have two special powers. I’ve had them for a long time and I’ve yet to find a purpose for them, but I’m sure they’ll come in handy some day.
My first superpower is the ability to be ignored by automatic doors. I can stand in front of these things for a week and they won’t open. I can jump up and down and get nothing. I usually have to dart in behind someone before I freeze to death outside.
My second superpower is the ability to buy from a store any electronic or mechanical product expected to perform a function, get it home and find that it’s broken or a part is missing. I can choose from hundreds and still find the busted one. I’m the kind of person who’ll find a needle in a haystack, but the needle will be missing a point.
Yes, yes, these abilities are astounding. They are my gift and my curse. I fear I’ll pass these powers onto my children. I know I’m already passing it onto my pets. I was told my new kitten, Chase, was a boy. He is a girl–who has now been renamed, Chasemina. If I drop Chasemina, she lands on her side, head or back, never her feet.
As a mundane superhero, I fear my superhero name wouldn’t be Batman or Wolverine, but Dud and my trusty catchphrase would be “What are you going to do?” combined with a shrug at the end.
The problem is for people like me, our mundane superpowers embarrass us. We stay at home, afraid of the impact we can inflict on the world. I’m sure I’m not alone in this power. I bet many of you reading this exhibit powers you perceive as crap. I don’t want you to be ashamed of your powers. I want you to tell me about them. Like the televisual Heroes, we too could band together to prevent a mild inconvenience on the world, as we don’t quite have the stuff to avert a global calamity.
So I ask you, what’s your mundane power? Go on. Unimpress me.