Simon Wood's Web Hideout » Blog » BACK STORIES: Not Getting Away With It 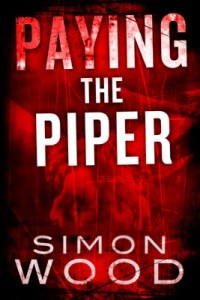 “How could I kidnap a child and get away with it?”

This was probably the wrong question to ask an FBI agent right out of the gate. The agent’s expression turned grim and his answer was clipped and a tad aggressive. “You couldn’t. We’d catch you.”

“Yeah, but,” I said before he interrupted me.

“No buts. We’d catch you. When a kid gets snatched, we drop everything. It becomes top priority. You wouldn’t stand a chance.”

I’ll admit it was at this point I started to panic. Not because I thought the Feds weren’t going to let me leave the building, but because I saw my novel falling apart around me. A child kidnapping is a key factor in Paying the Piper. A kidnapper with a grudge comes after the family of a newspaper reporter. I thought it was a good idea. So did the publisher. They’d paid me an advance on this very storyline. In the space of five minutes, my book was in tatters before it was written because the FBI knew better.

I thought the storyline was going to be tough to pull off, but not this tough. I quickly outlined the scenario for the book to demonstrate my master plan for counteracting law enforcement procedure. I waited for him to applaud me for my criminal genius. He didn’t.

I wasn’t too downhearted as I didn’t care if my antagonist got caught, as long as he got caught on page 347 and not page 10. I put my frayed plotline to one side and we talked kidnappings-procedures, old cases, likely outcomes, etc. As I listened a single thought rose to the surface. It’s bloody hard to get away with a high profile crime. As far as I can see it, as soon as the cops get a hold of the case, you (the criminal) are toast.

The problem is, it is impossible not to leave a trail. It doesn’t matter if you go hi-tech or lo-tech. There’s a trail. As I listened, I could envisage a snail-like physical trail left behind by my fictional kidnapper and the cops following it all the way to his lair.

I couldn’t see a way around the problem. A kidnapper, being a kidnapper, needs to make contact with the kidnap family. Phones are a nightmare these days. Landline or wireless, they’re easy to trace. Digital seems to be the criminal’s worst enemy. The technology’s strength is its weakness. As easy as it is to use, it’s just as easy to locate.

Going old school doesn’t help matters either. If the kidnapper sends a letter, he’s going to need a return address for return correspondence. That doesn’t even cover the issues of how easy it would be to trace the sorting offices the letter went through to narrow down the sender’s location. Document specialists can lift all sorts of forensic evidence off paper.

The only thing left open to the kidnapper is face-to-face meets and that’s fish-in-a-barrel time for law enforcement.

It doesn’t matter how you slice it, if you kidnap a kid for ransom, you’re going to get caught.

Eventually, with a little a devious ingenuity plot-wise and some character flaws, I built a plotline that worked, but the Q&A with the FBI was a tipping point. I’m a good guy, but it made me question myself and whether I would ever cross a legal line. I can’t say I won’t, but I can’t rule it out. Circumstance may dictate otherwise. However, the more I write and the more I research crimes for my stories, the more honest it makes me. In spite of how smart I think I am, I’d get caught. I’ve seen the inside of police stations, courtrooms and a prison and I quite honestly can say I don’t want to be arrested, I don’t want to go to court, and I definitely don’t want to go jail. I wouldn’t last a day in the big house. This smart mouth would get me into all sorts of trouble.

So a simple question about kidnapping helped turn me into a more law abiding person. It’s my fiction that’s just plain criminal…