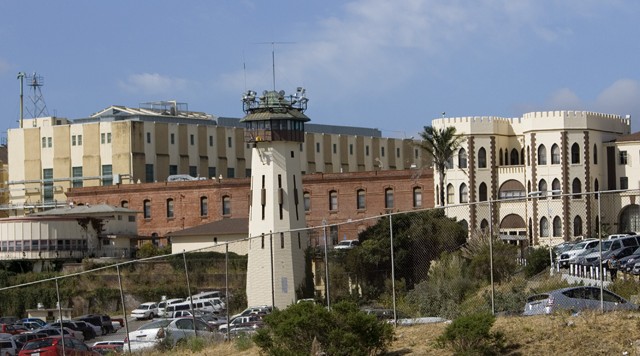 Like most people, I’ve only seen San Quentin from afar, so I jumped at the chance to see the inside. Before going in, I had preconceptions—I’ve seen OZ and Cool Hand Luke—these didn’t last long, though. The prison is located at 1 Main Street, San Quentin, CA—I found it amusing that the prison had an address, but taking the freeway exit, I discovered its part of the village of San Quentin—next to the Post Office, if you’re wondering. There are about sixty homes or so, overlooking the bay. Homes go for around $600k.

I was further knocked off balance by the prisoners’ hobby shop at the main gates with a prisoner (on the outside) running the store. I suggest you don’t haggle over prices. The hobby store was very nice, selling various leather products (no, don’t go there) and woodcrafts and paintings. I was disturbed by the nick-knacks featuring the guard’s main tower, a small pile of rocks, sledgehammer, and a ball and chain. This seemed very cruel and unusual punishment to me.

I’ll admit I was nervous about going inside the prison. The place is full of people who don’t want to be there and surely don’t want a bunch of tourists taking a look like it’s a carnival sideshow. So my nerves weren’t settled when the guard on the gate asked us to stand back because the paramedics were coming.

Before we could enter the prison itself, there were a number of check-in procedures. There is a strict dress
code, anything remotely inmate-looking is a no go. So everyone gets to look like they are from a photo shoot for the GAP. We presented ID and signed in at the main gate, before a short walk to an airport-style metal detector. There we signed in again, presented ID again and our hands were ink stamped with an UV dye at the entrance to the prison itself. We entered a cage, which worked like an airlock where one door had to be shut before the other could be opened, before we were on the side of the inmates.

The entrance reminded me that San Quentin is quite old, only few years younger that the state itself. Over its one hundred and fifty year history, it’s grown and developed during different periods, making it an eclectic place to say the least. There’s plenty of stuff to make you go hmm. The entrance to the prison itself is quite medieval courtesy of a castle façade and its original portcullis-style iron gate. A satellite dish is overshadowed by the 19th century hospital. Death row overlooks a touching memorial to guards who died in the line of duty. Painted by one prisoner, a beautiful mural stretching hundreds of feet adorns the dining room, charting California’s history.

Unlike Alcatraz, San Quentin is a fully operational prison, so wherever we went, we were mixing with the inmates. I was very self-conscious of this fact. I felt very guilty about being a tourist to someone’s downfall, regardless of whether that downfall was deserved or not.

About a third of the prison guards were women, which surprised me. I wondered whether the introduction of women guards helped with inmate stability, knowing they would get to see a female every day. I know it saw the end of nudey pinups. The best an inmate can get away with on his cell wall is Maxim.

San Quentin is home to 6,000 souls, but it’s not all maximum-security prisoners–that’s what Pelican Bay is for. No, San Q. runs the whole gambit. Most inmates are serving sentences up to ten years, but there are some lifers there from San Quentin’s old days and of course it does conduct executions, so it has a death row, but it’s also a Reception Center (RC) for incoming prisoners. This basically means it’s a processing center. The prison has 60 days to log you into the system, acclimatize you and send you to your designated prison, which may be San Q. or somewhere else. The new guys, or RCs as they’re called, wear orange jumpsuits and everyone is very weary of these people, because they could be drunk drivers or mass
murderers. You wouldn’t know.

The cells are incredibly small–around 5’x8′. To make matter even more claustrophobic, each cell is home to two guys and their toilet. Suddenly a five-year sentence seemed a lot longer. I can see why the inmates take advantage of the various education programs and jobs available to them–I know I would.

There are calls for the prison to be removed, which is understandable when you consider San Quentin is built into the Marin headlands. For those who don’t know Marin, it is the San Francisco Bay Area’s equivalent of Beverly Hills (George Lucas lives there) and the land the prison occupies is worth hundreds of millions. However, the substantial foundations the prison is built on make it infeasible to demolish, so don’t expect the prison to go any time soon.

I found the guards pretty upbeat–quite jovial in fact. None of them seemed ground down by their job. This extended to the inmates too. I won’t say they were happy to be there, but the inmates who spoke to us were polite. Inmates and guards exhibited respect for each other. The atmosphere was quite relaxed, although both sides seemed prepared for that to change. I could well imagine that when it gets rough, it isn’t a pretty sight—I only had to glance at the prison officer’s memorial for that.

Watching how the inmates and guards interacted with each other, I did feel a sense of society and I suppose one has to exist if anyone is to survive their time there. Everybody seemed to be aware of the rules and their place in the prison.

I found my visit quite sobering. Even though the people there were seeing out their time in livable conditions, it’s about the last place on earth I ever hope to stay.