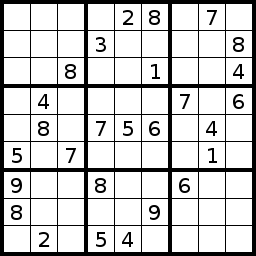 I’m a numbers person. I see patterns in numbers which I blame on taking advanced mathematics. But I don’t get Sudoku and I don’t understand the fascination with this game. I suppose I should preface that statement by saying I’ve never bothered to read the rules of Sudoku, but that’s beside the point. Recently, I sat next to a guy on an airplane who spent the whole flight with his pen poised over a Sudoku puzzle, mumbling to himself and never once writing a number down. Now, I’m not sure which is sadder, the fact that this guy puzzled over a problem for two hours and didn’t write a damn thing or the fact that I watched him do it for two hours.

I like things that are intuitive, such as crosswords. You don’t need to read any instructions to do a crossword. You just follow the clues and fill in the boxes. But you don’t get that level of simplicity with Sudoku. So I don’t have time for it.

But I don’t want people thinking I’m incapable of doing a Sudoku puzzle, so when I’m on a plane now, I pull out the in-flight magazine and flick to the Sudoku page. I hem and haw for a couple of minutes with pen in hand, then write the first numbers that spring to mind before turning to my fellow passenger and saying, “That was a tough one.” This is especially fun when you’re sitting next to someone who is doing the same Sudoku puzzle.

Is this cruel of me? Probably, but we live in a complicated world and we need some simplicity in our lives and Sudoku isn’t helping.