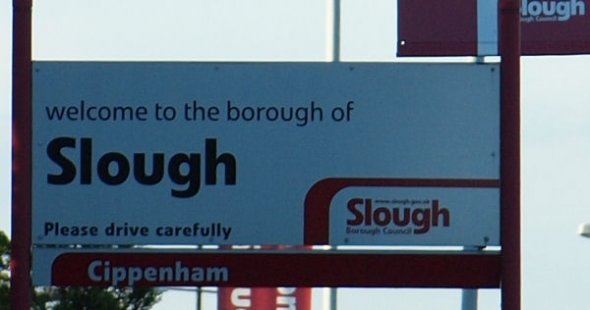 Some of you may know that I come from a small industrial town in England called Slough. A few of you here have either come from there or have worked there. Slough, as cities go, has a rep, but not a good one. It doesn’t have a lot of claims to fame. William Hershel’s observatory was in Slough and he discovered Uranus from there. While trying to decide what to call the new planet, he must have looked out the window, seen Slough and decided upon Uranus. The trading estate is the oldest in Europe and has its own power station–fancy, huh? Tracey Ullman is a Slough girl and look what happened to her. Windsor and Eton sit upwind of their working class neighbor. A bumper sticker once coined the phrase, “The Best View of Slough is Seen From Your Rearview Mirror.” The greatest condemnation came at the hands of the Poet Laureate, Sir John Betjeman, in his poem, Slough, which opens with: “Come friendly bombs fall on Slough!”

But the tide is turning, somewhat. Slough was the locale for the hugely successful TV comedy, THE OFFICE. I used to work at one of the buildings used in the opening credits.

Since then, I’ve noticed Slough seeping into things. The creators of the hit TV show, LOST, were big fans of the show THE OFFICE and I noticed they squeezed in a little homage to THE OFFICE and Slough. The character Charlie worked for a photocopying company in Slough. A couple of years ago, IBM was running an ad featuring King Arthur and he has to get his goods and services to Slough.

So is Slough in vogue now? I can hear a few million voices in England saying no, but hey, they aren’t mentioning Windsor in ads and TV shows. I’ll meet the doubters halfway. Slough has raised its profile a tad, but it’s still the butt of a joke. It’s not as dull as it used to be, though. I think my hometown needs a lift to take it over the top, so I may just have to set a book there. If that works, things will have to change. So friendly bombs–you’ll have to find somewhere else to fall.

Have you thought of Stevenage?