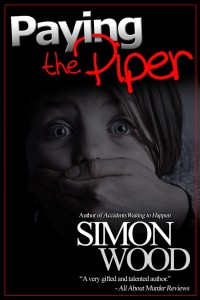 I’m doing something a little different for the December Book of the Month feature. I’m shining a light on a couple of books that readers have yet to discover. Today’s spotlight title is Paying the Piper.

PLOTLINE:
The Piper is the Bay Area’s infamous child kidnapper. When the Piper selected crime reporter, Scott Fleetwood, to report on his latest child kidnapping, Scott thought he had the world in his grasp, but he held nothing. Scott had been duped by a wannabe. By the time the FBI exposed the hoaxer, time had run out, leaving the real Piper only one course of action—to kill the child. With a murder added to his résumé, the Piper vanished leaving Scott to take blame from the public and the investigating FBI agent, Tom Sheils. But now, eight years later, the Piper’s back, with very specific targets in mind—Scott’s young children. Scott can have his children back as long as he can pay the ransom. The hard part is that ransom isn’t measured in dollars, but in blood.

Praise for Paying the Piper,:
“Wood keeps the pages flying, even as his plot gets more and more complex, accelerating nicely toward an elegant climax.”
— Publishers Weekly

“Tense, fast-paced, and near impossible to put down.”
— Sean Chercover, author of Trigger City

“Simon Wood might not be a household name right now, but if his books continue at this pace he might soon be.”
— Reviewing The Evidence

“Hard to believe this is Wood’s sophomore effort. Delightfully twisty and an amazing climax.”
— Book Bitch

“An action-packed thriller that never slows down.”
— Midwest Book Review

“This is a finely crafted thriller.”
— Bookgasm 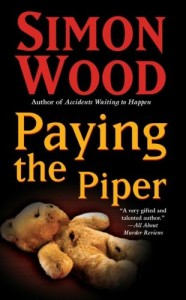 This is a book I’m quite proud of. I wanted to do a book which involved kidnapping, but I wanted to do something a little different from the usual kidnap and ransom style story. I didn’t want the ransom to be money and I wanted it to be commodity far more difficult to obtain. To help me with the story, I talked with the FBI and they shared the tricks of the kidnapping trade. I think it helped make a difference to the story as their insight and experience really helped develop to devious plot.

If you’ve not read one of my books or need deciding what to read next, then I hope you’ll give Paying the Piper a shot.

3 Responses to “Book of the Month: Paying the Piper”