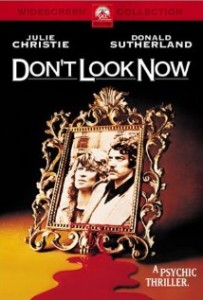 Just seeing someone wearing a little, red, plastic raincoat gives me goose bumps. Now this doesn’t apply to blue or green ones or adult-sized ones or ones made from natural fibers–just the ones made from plastic that are red and sized to fit a five year old.

The film fans out there will immediately know why I have this fear. I saw Nicholas Roeg’s version of Daphne Du Maurier’s DON’T LOOK NOW.

The movie’s climax did it to me. When Donald Sutherland finally learns the identity of the person wearing the little, red raincoat that his dead daughter wore, I nearly collapsed a lung. Since then, little, red, plastic raincoats have given me
the willies.

I know now that I saw the film when I was far too young. It’s not often that I say that. I saw a lot of scary movies when I was young, but this one had a profound effect. I find it amusing that when I saw the movie at my tender age, I totally blanked out the famous sex scene between Donald Sutherland and Julie Christie. I only realized that it existed when I saw the film years later (when I paid attention to those sorts of things).

Even now, I can’t watch the film. I recorded it off the telly a few years back. I still haven’t watched it. It’s probably the only film I love that I’m afraid to watch.

Over the years, I’ve seen kids wearing the same little raincoats and I’ve had to literally cross the road to avoid them. Like Donald Sutherland, I have this urge to make sure there is a little child wearing it but at the same time, I don’t want to see, just in case I find what he did.

My mum knows about this fear I have and she takes great pleasure in pointing them out to me. Obviously, I’m her favorite child.

There you have it. Some people fear terrorism, spiders or aliens from another world. For me, it’s first graders wearing red raincoats.

Now that I’ve cut you in on this one, don’t come to one of my signings dressed in a red raincoat. You wouldn’t want to see me scream.